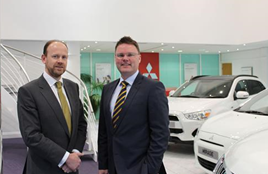 Mark Miller is the new area manager for the East of England while Matthew Baxter will cover the Midlands and parts of Wales.

Miller’s last role was with RCI, the finance division of Renault and Nissan, and before that he spent five years with Volkswagen Financial Services.

Baxter spent the past five years working with Nissan, initially as a used car performance manager, with the past two years specialising in EV sales development.

He started in the retail motoring industry in 1987 and has experience of small, independent dealers and large plcs, including a spell with Formula One champion Damon Hill’s dealership in Warwickshire.

Having been heavily involved in retail, including owning his own dealership, Baxter said: “What excites me about this new role is working with the dealers. I will be using my own experiences to help develop their businesses.

“The dealers I have met so far have given me a real confidence that we have got great foundations in our dealer network.

“I’m excited about the product – every time you see a charging point there’s an Outlander PHEV there now. The company has found its niche as a 4WD and hybrid technology manufacturer, which is exciting for the future.”