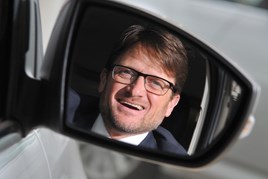 Loyal employee Colin Massey has been appointed as general manager at Jennings Group’s multi-franchise Stockton site as he landed his fourth promotion in 27 years with the business.

Jennings Group managing director, Nas Khan, described Massey as “an asset to the management team” as he announced his appointment at the Cargo Fleet Lane supersite near Middlesbrough.

Khan said: “Colin is a loyal, dedicated and committed member of staff and an asset to the management team.

“Over the years, he has gained vast knowledge and experience regarding the many products and services we offer, in addition to internal company systems, policies and procedures, which made him ideally suited for the new role.”

Massey’s career with Jennings Motor Group began 27 years ago when he was appointed as a sales executive at the group’s Yarm Road branch in Stockton.

His first promotion saw him assume the role of deputy business manager and this was followed by a second promotion to sales controller.

In 2009 Massey claimed a hat-trick of promotions when he took on the role of sales manager at the Jennings Ford branch in Middlesbrough.

Speaking of his latest move, he said: “This is a fantastic opportunity for me.

“I started working as a sales executive in the late eighties when Jennings solely operated Ford dealerships.

“Over the years, the company has expanded significantly following the implementation of on-going investment programmes in the region.”

Jennings Motor Group is one of the longest established motor dealers in the North East region, having first registered as a limited company in 1912.

Today, the group operates three Ford dealerships, including a Ford Direct site and two Ford Transit Centres, in addition to two Kia franchises and a Mazda, Seat and Mitsubishi outlet.

Jennings Group achieved a turnover of £189m in 2015 and is currently preparing to demolish its Stockton Ford dealership to make way for a £3.5 million state-of-the-art new facility.