Was this article useful?
5 people found this useful
5 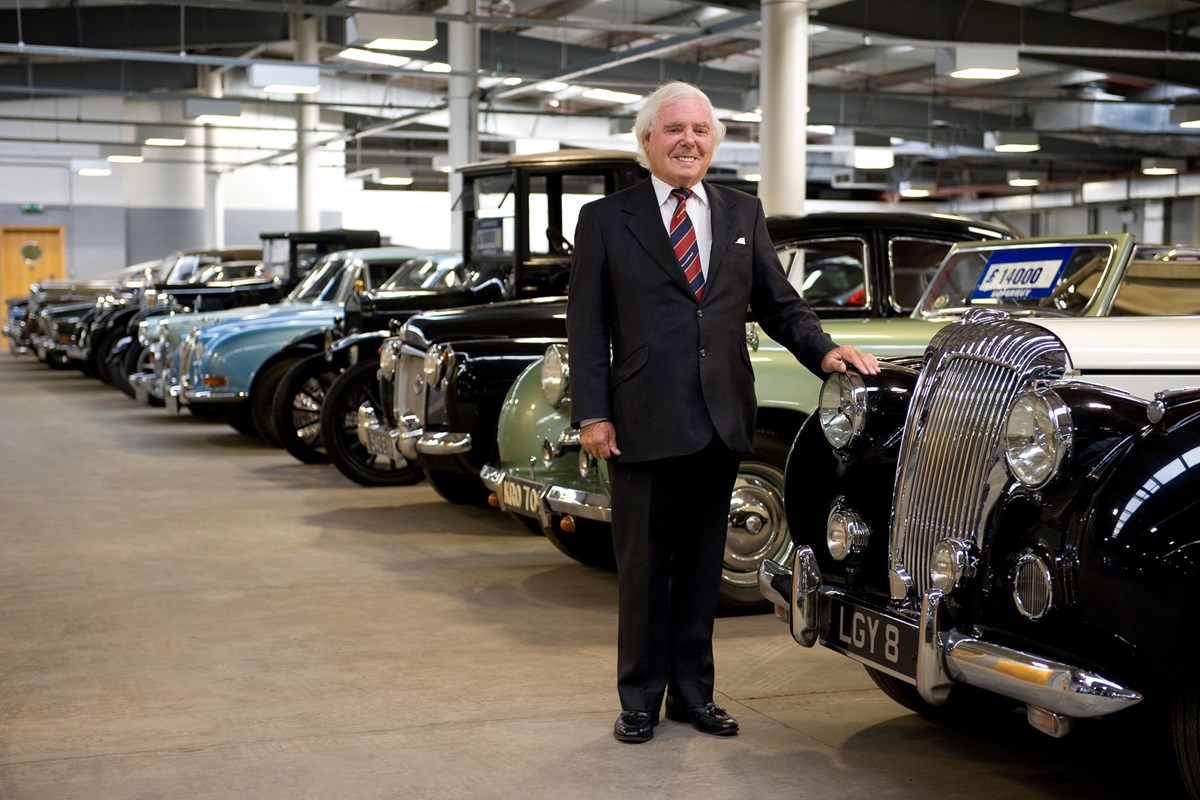 He was Britain’s first billionaire car dealer, bought and raced a yacht once owned by Simon Le Bon and owned a 1950 Daimler coupé once driven by King George, but for Sir Arnold Clark, the work was more important than the trappings of wealth, said one of his closest friends and colleagues.

“Arnold was driven by pure work ethic. He never truly enjoyed the luxury life as you would imagine,” said Glen Gall, who was the first salesman Sir Arnold hired and eventually rose to managing director of Arnold Clark Automobiles until his retirement in 1999.

Gall said he was deeply saddened by the death of the “close friend” who transformed a used car dealership in Glasgow’s East End into the £4.36 billion turnover, fourth-placed AM100 retail giant it is today.

Sir Arnold died peacefully at his home in Killearn, on the banks of Loch Lomond, on the morning of April 10. The 89-year-old father of 10, grandfather to 17 and great-grandfather to eight, was surrounded by family at the time.

"I’m not sure if we’ll see the like of him again in this industry. He will be sadly missed" Glen Gall, GTG Training

Gall said: “Arnold was a family man first and foremost. In many ways, he grew the business as a family, looking after his staff and targeting customer satisfaction and the return sale above all else.

“He was always a salesman, who knew from the start that he wanted to drive volume to give customers the best possible value.”

“He told me recently that he’d never intended for the business to get as big as it did, but his influence has always been at its core.”

Gall is chairman of GTG Training, an organisation started by Arnold Clark Automobiles to create a path into the motor industry for the engineers and salesman of the future.

The 82-year-old likened Sir Arnold to Henry Ford, saying he was a “genuine innovator” who “changed the way we buy and sell cars”.

“I’m not sure if we’ll see the like of him again in this industry. He will be sadly missed – but he certainly leaves a strong legacy behind.” 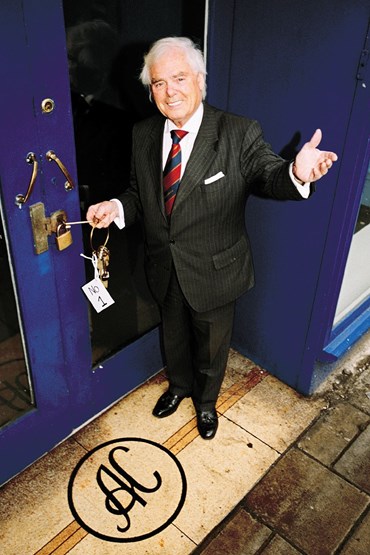 “He will be hugely missed and we send our condolences to his family and friends,” she said.

Eddie Hawthorne, group managing director at Arnold Clark, said the best tribute the business could pay its former leader was producing a record set of results in 2017.

Like Gall, he said the man who brought him into the industry never aimed for the heights he achieved.

“He was never ambitious; he just had an unbelievable work ethic,” said Hawthorne.

“He wanted to sell cars, make customers happy and secure his business.”

“I remember the first time we met. I was a fresh-faced, non-grey-haired employee of the business’s official auditor 30 years ago. On the day I finished, he said ‘I’ll see you next year’. I said ‘no you won’t, I’m looking to get out of the profession and into industry’. He said ‘come and work for me’.

“He dealt with me right there, on the spot. After 20 minutes, I was working for Arnold Clark. That’s the kind of character he was. Not

ambitious as such, but he had a great work ethic and when he saw something that he wanted to get done he would get it done right there and then.”

Sir Arnold’s desire to get things done famously saw him hold board meetings at the business’ old Pollokshields headquarters on Monday evenings to avoid interfering with the day’s trading.

Hawthorne described his boss as a “real gentleman” and said he valued the regular visits he made to his home for catch-ups.

“He was an encyclopaedia of knowledge that was absolutely priceless. He had a fantastic instinct for business.

“His influence on the business was always there and that will certainly continue. I’ve always understood that this is his train set and I’m merely driving it.” 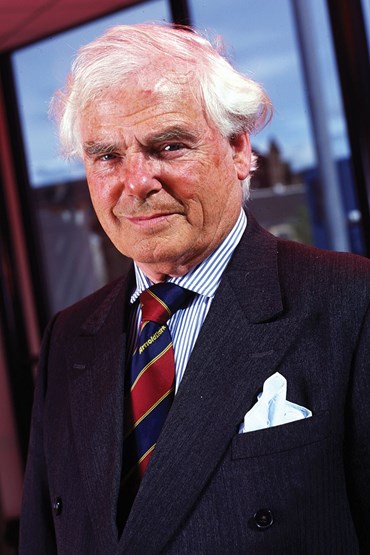 Sandy Burgess, the chairman of the Scottish Motor Retail Association, was a contemporary of Sir Arnold’s and sat on the Ford dealer council with him.

He said: “I was trying to grow my business at the same time as Arnold Clark, operating as a Ford and Peugeot dealer, but the way that business has led the way in many areas and evolved – especially as it got bigger – was remarkable. That was down to Arnold.

“He really was an inspiration and transformed the motor trade.

“From the start, he knew he wanted to push volume, buy bulk to achieve value. He knew that to add a fleet operation and push that back through the used car channels was the way to go and that’s the model that so many people use now.

“Despite all the growth and the acquisitions, it is still hard to find a bad word said by those who met the man. He always had time for people and simply knew the industry inside and out.”

The birth of a motor retail legend

The son of a steelworker, John Arnold Clark was born on November 27, 1927, in the Townhead district of Glasgow.

A keen entrepreneur from an early age, he had a paper round and sold vegetables grown by his father before becoming an apprentice shoe designer with the Co-Operative.

At 17, Sir Arnold was called up to the RAF. He excelled at motor mechanics and left the RAF as an NCO Motor Mechanics Instructor. Clark told The Sunday Times: “I was sitting there swotting while all the other boys were drinking beer. I was determined to get into the car business.”

After leaving the RAF, he found it hard to find work as a mechanic. With £70 in demob money he bought a Morris Ten Four, which he sold for £150.

He opened his first showroom in 1954 in Glasgow’s Park Road.

Glen Gall, his first salesman, recalls: “It was a modest set-up. Arnold and I would work 70 hours a week. He was a natural salesman. He had a great way with customers and didn’t like to see anyone leave without making a deal.”

In 1959, Sir Arnold got his first new car concession with Morris cars, but the business still prioritised its used operation. 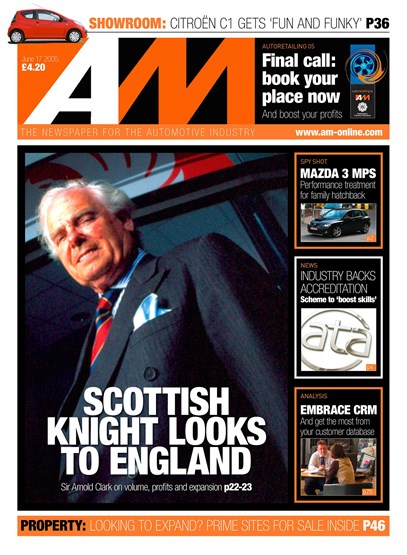 In 1963, he teamed up with Lombard to launch a finance arm (Arnold Clark Finance). It coincided with taking on Jaguar and Daimler franchises that took the business to five sites.

Soon, Arnold Clark Automobiles extended into the rental market. Fifty years on, the business has a fleet of more than 5,500 vehicles throughout the UK.

By the 1980s, Arnold Clark Automobiles had become Scotland’s largest car retailer and expansion into England followed with an initial site in Liverpool.

The business now employs 11,000 people, has 800 apprentices on its books and claims to be Europe’s largest independently owned car retailer.

In 2004, Clark was knighted by the Queen in recognition of his services to the motor industry and the Scottish community.

A decade later, the business celebrated its 60th year with a record turnover of £3.2 billion.

This summer, the business will announce a record turnover of £3.6bn for 2016.