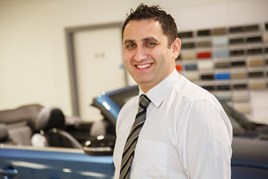 Swansway Garages has promoted 200-car sales performer Arash Shayestehroo to the post of sales manager at its Wrexham Volkswagen facility.

Shayestehroo, who has completed the 100-mile return commute from his home in Wilmslow for the past ten years, has consistently finished the year among the group’s top three annual sales performers.

Having begun his career at Wrexham Volkswagen as a sales executive, promotion to the post of senior sales executive soon followed, as brand manager Gary Wood explained: “Ash was a simply exceptional sales person, he was the first sales executive in the group to sell more than three hundred cars in one year, which as you can appreciate is an awesome feat”.

Shayestehroo said: “I moved to Wrexham from Altrincham Volkswagen and some people may have thought the commute from Wilmslow would prove too much for me, but ten years on, I think I’ve just about proved that’s not the case.”