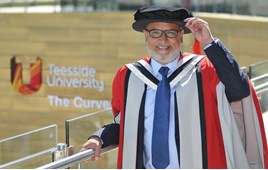 Khan was made an honorary Doctor of Business Administration in recognition of his contribution to the economy and for his charity work, areas which saw him made an OBE at an official ceremony in March.

Despite coming to Britain at the age of 14 and not being able to speak a word of English, he went on to become sole proprietor and managing director of multi-award winning Jennings Motor Group.

Khan said: “It was an absolute privilege attending and being part of the graduation ceremony. We will continue to build on a name synonymous with quality and an excellent customer service.”

Today, Khan is responsible for employing more than 500 members of staff at the company’s North East and West Yorkshire-based branch network, which mainly consists of motor dealerships, but in recent years under his leadership, has diversified to include Harley-Davidson franchises, a property division and a Subway store.

Over the years, he has achieved a number of other accolades including an OBE for his charity work and contribution to the economy, Ford Motor Company’s prestigious ‘Salute to Dealers’ global award, a local business award, in addition to an award from Human Appeal International for his commitment to charity.