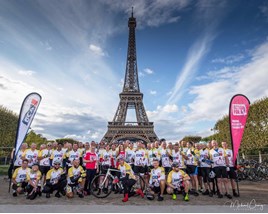 BCA’s Paris Challenge raised over £90,000 for Action for A-T, tripling their initial target.

On September 14, a team of 45 amateur and fun riders from BCA and the wider motor industry gathered at BCA Blackbushe, before embarking on a 400km ride to Paris.

The event aimed to raise £30,000 for Action for A-T, a charity that funds research into a rare childhood disease.

Three days later, the team stood in the shadow of the Eiffel Tower having more than tripled their initial goal by raising £93,436.

BCA’s chief commercial officer Craig Purvey who took part in the event, said: "It is testament to the team’s hard work and dedication that we arrived in good shape having ridden through everything from sunshine to thunder storms as we crossed the French countryside from Dieppe towards Paris.

“Well done and thank you to everyone who undertook the BCA Paris Challenge, the riders and the support team, our suppliers and customers who sponsored our efforts and everyone for all their support and kind messages along the way.”

Sponsors from manufacturing sector included Toyota and Renault, alongside leasing companies such as ALD, LexAutolease and Olgivie.

Action for A-T’s chief executive Sean Kelly said: “The three-day endurance cycle was a great team effort supported by BCA staff, customers and a variety of sponsors who collectively raised a record breaking amount for our charity.”

BCA pedal to Paris to fund research into rare disease

BCA pedal to Paris to fund research into rare disease