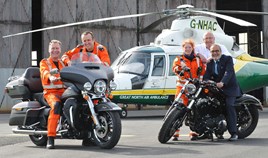 Jennings Motor Group is pulling out all the stops to raise as much money for the Great North Air Ambulance Service (GNAAS) before the end of 2017.

Throughout November and December, a number of other fundraising activities are scheduled to take place across Jennings Motor Group’s branch network, in addition to the charity’s car raffle draw which will see a member of the public driving away in a brand new Kia Sportage, supplied by Jennings Kia.

This is the second consecutive year that a number of fundraising activities and events have been held by staff across the motor dealer group’s Ford, Ford Direct, Kia, Mazda and SEAT branches, alongside staff at the company’s Harley-Davidson dealerships and Subway store.

The fund-rarsing drive has seen the business make various donations, including a brand new Kia Rio for last year’s annual car raffle and a new Kia Sportage this year.

The most recent fundraising event took place at the group’s Gateshead Harley-Davidson dealership and raised more than £300 from donations.

GNAAS’ chief executive Graham Pickering MBE said: “Thanks to everyone at Jennings and all their customers for getting behind our cause with such dedication.  We rely on this kind of generosity to survive.”

Jennings Motor Group’ managing director Nas Khan OBE said: “There’s been quite a variety of fundraising activities taking place throughout the year, with everything from a sponsored weight loss competition, staff taking part in the Great North Run and bake-offs to auctions, raffles and tombolas.

“And we’ve still got plenty of other activities planned for the remainder of 2017, as well as the official car raffle draw.”