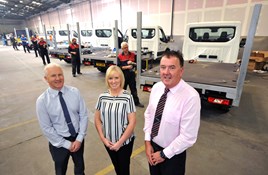 Jennings Motor Group has expanded its commercial with the acquisition of Nesmo Truck Bodies as part of an “ongoing expansion plan” in the Teeside region.

The latest business investment announcement for the North East-based AM100 dealer group, which already operates two Ford dealerships, in addition to Kia, Mazda and Seat franchises in Teesside sees the addition of a business based directly behind the company’s Kia dealership on Opus Park, Stockton’s Preston Farm Industrial Estate.

Overseeing the new arm of the Jennings’ business is bodyshop manager, Tony Hallimond, who is also responsible for the bodyshop department at the group’s Ford dealership on Yarm Road in Stockton.

Hallimond said: “We’re delighted to announce that Nesmo Truck Bodies is operating as part of Jennings Motor Group and look forward to ongoing future success as a result of continuing to provide high quality products and services, combined with employing an experienced and skilled team, and delivering Jennings’ award-winning customer service.

“The workshop area can cater for up to 15 vehicles at a time, which will enable us to cater for the demands from the commercial vehicle industry.”

Craig Brown, from Stockton, who joined the original Nesmo firm straight from school in 1980, has been appointed as commercial vehicle coachworks manager at Nesmo Truck Bodies.

News of its latest business venture, as owner of Nesmo Truck Bodies, follows August’s news that it will gain two more dealerships for Kia and Mazda, which will operate adjacent to Sunderland Football Club's Stadium of Light.

A former two-storey dealership is being completely refurbished to house the two franchises in separate five-car showrooms, which will share an eight ramp workshop and standalone valeting building at the rear of the site.