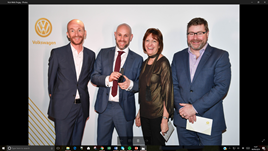 Former Alan Day apprentice Nick Wells has been awarded with Volkswagen's prestigious Gold Pin after working his way up from 16-year-old new starter to the post of general manager.

Wells was presented with the award at a ceremony at Quaglinos in London, hosted by the brand director of Volkswagen UK, Alison Jones, and Rod McLeod, head of operations, to become one of only 1,200 people to receive the accolade since it was first presented in 1967.

His initial roles were parts advisor, parts supervisor, parts manager and group after sales manager, he is now responsible for overseeing the smooth running of the Hampstead showroom in Finchley Road, including hiring and training.

Described as a “real inspiration” to staff, Wells was praised for helping Alan Day VW reach the top three for customer satisfaction for the last three years, and for featuring in the top 20 on the One Business Scorecard.

Wells said: “I would like to thank my team at Alan Day VW for all their hard work and effort, without whom this would not have been possible.

“I would also like to express my thanks to Paul Tanner, the managing director, for believing in me and encouraging new ideas and initiatives.”

In his spare time Wells does charity work for the homeless and also volunteers every week for the Sarries RFC programme helping youngsters with learning disabilities play touch rugby with other managers from Alan Day.