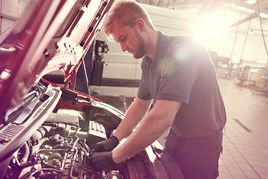 The Department for Education (DfE) has confirmed that employers will be able to spread up to 10% of apprenticeship levy funds to multiple businesses from July.

Previously, funds could only be transferred to one other employer but the way funds can be distributed is being changed after the DfE received criticism over a lack of flexibility in the scheme.

It’s hoped the move will lead to more apprenticeships being created.

Under the scheme, any business with an annual payroll of more than £3m is required to pay 0.5% of its total wage bill – minus a £15,000 allowance – into a fund it can then draw on to fund approved training schemes.

Despite dealers in the AM100 paying a total of £196 million into the spprenticeship levy in its first full year, some motor retailers are still struggling to adapt to the scheme and the number of starting apprentices has fallen.

The Institute for the Motor Industry has consistently called for a more pragmatic approach to apprenticeships after concluding that levy remains “too complex, restrictive and inflexible”.

The latest Government figures show that the number of new apprenticeship starts had declined by 25% during the first two quarters of the 2017/18 academic year, with just 194,100 reported for the, compared to 258,800 during the same period in 2016/17.

IMI chief executive, Steve Nash, has said that many of its clients still consider the apprenticeship levy system as an added tax as they struggle to overcome complexities which make taking advantage of funding difficult.

He said: ““Too many employers have struggled to get the training they actually want and need for their businesses approved for re-claim against their levy payments.

“This is why many are simply regarding it as a tax and have disengaged. That’s a great shame because the introduction of the levy should potentially have resulted in new apprenticeships being offered in a great many sectors and occupations where they haven’t previously existed.”