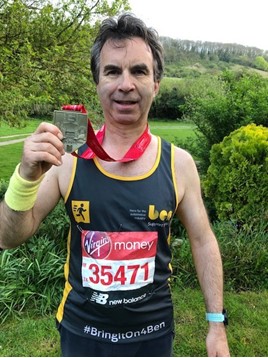 Jewelultra Group marketing director Lance Boseley has succeeded in raising over £2,300 for Ben after shining in the 2019 London Marathon.

Boseley was the sole representative of the automotive sector’s benevolent charity at this year’s event – held on April 28 – but battled severe cramp to raise much-needed funds for the cause.

Despite his struggles from the 23-mile mark, the 55-year-old paint protection specialist completed the course in 4 hours 30 minutes and was keen to thank his colleague’s from the sector for sponsoring his efforts.

Speaking to AM at the recent 2019 Automotive Retail Congress, at Coventry’s Ricoh Arena, Boseley said that he had been taken-aback by the support of the Ben charity and others who showed their support through sponsorship.

“I ran the London Marathon for Ben because I have worked in the Automotive industry for nearly 20 years and I know how important Ben is to the industry,” he said.

“I thought it was about time I did something worthwhile for them and as running is my passion the logical thing to do was to run the biggest Marathon in the world.

“I came to running quite late just before I turned 50 and I am 55 now but the health and social benefits have been great but nothing beats the feeling that you’re doing something worthwhile for a really worthy cause.”

The trio will be tackling over 10 hours of cycling each day, including on self-propelled Schiller waterbikes, from July 4 to 7.

So far, over £142,000 has been raised through the challenge and the trio are on track and determined to reach the fundraising target of £300,000.

To support their effort, donate via Just Giving by clicking here.