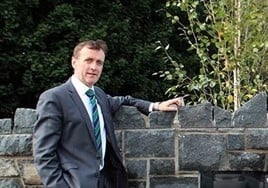 Tributes have been paid to car retail group founder John Mulholland after he lost a 14-month battle with cancer at the age of 55.

Businessman John Gerard Mulholland, originally from north Belfast – the founder of the John Mulholland Motors and a devoted fan of rallying and motorsport – died surrounded by his family on Saturday (August 17).

A post on the John Mulholland Motor Group Facebook said lifelong rally enthusiast, Mullholland, had “turned his matchbox cars into a real life,” by creating an “award winning, thriving car showroom, which he filled with love, energy and enthusiasm”.

It added: “He rallied most of the roads in Ireland and further afield. He applied perfectionism and professionalism to everything he did yet somehow managed to have more fun than anyone.

“Most importantly, he was a father and husband. Everything he did, every deal he made, every late hour spent at work was for his family who are now completely heartbroken.”

The Group’s post added: “If you ever had the pleasure of meeting John, you will know the impact he left on you and the room. His energy was infectious and his passion and charisma for what he did will remain infamous.

“The self-marketing campaigns will go down as the best in history.”

The president of the Northern Ireland Motor Club – promoters of the Ulster Rally, which is sponsored d by the dealer group – described Mulholland as “a gentleman”, adding: “His handshake was all anyone needed.”

As a mark of respect John Mulholland Motors will be closed on Thursday (August 22) for Mulholland’s funeral.

In lieu of flowers the group has asked for contributions to be made to the Friends of the Cancer Centre, a charity which was “close to John's heart”.

The appeal comes after Mulholland openly spoke about his illness, fronting a fundraising campaign in a bid to donate £40,000 to the centre at Belfast City Hospital by the end of the year.

Founded more than 30 years ago, the John Mulholland Motors group has five showrooms in two locations; Randalstown in County Antrim and Campsie, in County Derry/Londonderry.

The Skoda, Ford and Hyundai franchisee was Skoda's Retailier of the Year for three consecutive years between 2015 and 2018 and achieved an annual turnover of £37.3m in its last filed accounts, for the 12 month period to December 31, 2017.