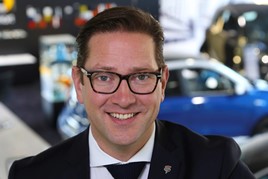 A statement issued by the AM100 retail group today (September 24) described Cranswick as being “passionate” about how collaborative the automotive industry needs to be in order to maximise the opportunities and overcome the hurdles with electric vehicles.

It added: “The appointment and creation of this new group recognises the huge shift in car production and retail over the past few years.”

Representing the industry alongside the NFDA in his new role, Cranswick will support their lobbying efforts and provide insights on where the EV industry needs assistance from the Government.

He said: “The electric vehicle industry is a great example of the degree of change we are currently experiencing.

“EVs are showing us that customers are thinking very differently about the type of vehicle they want, as well as how they purchase it.

“Not only that, access to charging points could show a real shift from car ownership to car usership in order to fit in with the customer’s lifestyle."

The association's close scrutinty of the groweth in EV sales has been heightened since the launch of its Electric Vehicle Approved (EVA) scheme at an official launch event at the House of Commons back in May.

Car registration figures published by the Society of Motor Manufacturers and Traders (SMMT) for August showed that retailers were right to be preparing for increased EV sales, with sales up 377.5%, to 3,147 units, during the month.

Cranswick said: “The adoption of EVs up until now has been quite slow, but with an influx of new models coming from OEMs and the issues around battery life and access to charging points now starting to be addressed, we anticipate demand to ramp up.

“I am looking forward to assisting the NFDA in their lobbying efforts to drive forward the evolution of the EV industry.”

The NFDA represents franchised car and commercial vehicle dealers in the UK. It estimates that there are more than 4,500 franchise outlets in the UK and approximately 555,000 people working in the automotive retail sector.

Sue Robinson, director at the NFDA, said: “Franchised dealers play a key role in the development of the electric vehicle sector and the NFDA EV Group has been established to coordinate industry views in this area.

“Jason’s experience and knowledge of the industry will be of significant support to our lobbying efforts aimed at tackling the issues affecting the growth of the sector”.