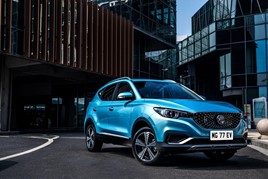 The National Franchised Dealers Association (NFDA) has said that motorists will trigger a four-fold growth in electric vehicle (EV) sales if they follow through on their current buying intentions.

Consumer insight delivered by the organisation’s latest Consumer Attitude Survey showed that while just 4% of consumers said that they were intending to buy a pure electric car, the figure represented a four-fold increase in the current UK ownership of 1%.

The survey of 2,000 consumers – conducted by market research agency, Public Knowledge – also revealed that 60% of respondents intended to buy a petrol vehicle next, compared to just 16% who said they would purchase a diesel.

Hybrid vehicles scored a significantly high proportion with 16% of consumers expecting to buy a hybrid, which is four times the current ownership at 4%, meanwhile.

“This is beneficial for franchised dealers who are best placed to service the growing electric demand in the car market.

“Combined with the 75% of new vehicles purchased at franchised dealerships, the dealers are likely to take market share in the near future, ensuring a consistent and reliable service to as many consumers as possible.”

Earlier this month EV sales looked to get a significant boost with the Government’s announcement that company car drivers choosing a pure electric vehicle (EV) will pay no benefit-in-kind (BIK) tax in 2020/21.

In its response to its review of the fallout from the roll-out of the Worldwide Harmonised Light Vehicle Test Procedure (WLTP) introduced on September 1 last year, and its effect on vehicle taxes, HM Treasury has binned the previously published BIK rates for 2020/21, AM’s sister title Fleet News reported.

The NFDA’s latest Consumer Attitude Survey was its seventh to date and was compiled as the result of a 15-minute survey completed by consumers online.

While its results revealed that consumers intend to make the move into alternative fuel vehicles (AFVs) in greater numbers, such vehicles’ market share remains low and those surveyed still cited concerns about a potential purchase.

The long wait for delivery of an EV was not among consumers' immediate concerns, despite lead times of up to 12 months on many vehicles - such as the Hyundai Kona EV.

But concerns did include access to charging points (which 53% of consumers selected as an issue), battery range (51%), and the cost of purchasing an electric vehicle (47%).

Among those who indicate charging is a barrier, 78% agreed that a lack of charging points in public places such as car parks in shopping centres is a reason this is a barrier.

However, car retailers have an opportunity to allay fears with advice to help customers realise the reality of their average daily usage – motorists travel less than 30 miles a day on average – and the provision of home charge points at point of sale.

Research carried out by AM found that Hyundai’s take up on wall box installations overall since we first launched Ioniq has been on average 43% for IONIQ EV, 23% for Kona EV and 18% for Ioniq Plug In Hybrid.

A spokesperson for the brand said that this did not mean “that other customers don’t invest in a wallbox as they are free to source themselves. Also some customers may already have had a wallbox fitted for a previous electric vehicle.”

Sister brand Kia said that its retailers had sold home charge points to around 50% of customers.

At Renault, every new Zoe sold comes with the home charge point as part of the purchase.

Chargemaster states that users of its network charge, on average, 17 times a month at home and six times a month on a public charger – getting around 75% to 80% of their EV charge at home.