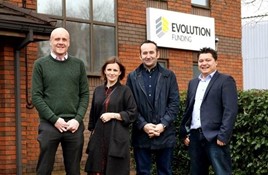 They join the business a month after BPF’s national accounts director Keith Bell took the role of sales director.

Ingrida Cardosa joins as account manager for the North East region, focusing on larger used car operations. Cardosa was with BPF for a year, following a fourteen-year-long finance role at Car Giant.

Jonathan Turner joins as account manager for the North East region. Turner spent ten years at Barclays before joining Hitachi Capital and going on to head up a new automotive finance business venture on behalf of Creditas.

Mark O’Reilly joins as part of a newly formed Technical New Business Team. O’Reilly was with BPF team for over a decade, dealing with the Top 100 groups and specialising in emerging markets, online and other digital marketplace providers. His new role will focus on Evolution’s technical proposition to dealers and potential partners looking to digitise the motor finance customer journey.

Bell said: “I am delighted to welcome my former colleagues to the Evolution team. I have had the privilege of working with all of them at some point and know the value that they will bring to the business.

“Evolution is enjoying unrivalled growth and transformation, including a dedicated strategic focus on our unique technology offering. Acquiring experienced and time-served talent will allow us to leverage the significant opportunities available to us”.

The appointments follow a year of restructuring since a private equity investment deal with LDC in February 2019 saw the firm valued at £110 million.