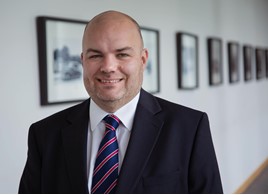 Citroën UK has announced the appointment of Eurig Druce as its managing director.

Druce will replace Karl Howkins, who joined the brand from fellow PSA Group manufacturer Vauxhall in May 2018, effective from February 1, 2020.

Howkins is leaving the French carmaker to start his own business, a source at the brand told AM.

Druce has held the position of sales director for Citroën UK since 2016.

He joined in 2001 as a trainee and spent 14 years working directly with the network in field-based roles across both sales and aftersales, including director of parts and service operations for Peugeot, Citroën and DS Automobiles.

Druce said: “It is an exciting time to take over the reins from Karl. I look forward to accelerating the momentum that we have built up over the last few years as we increase our market share and prepare the Citroën brand for electrification and new models.”

In 2020 Citroën retailers will welcome a facelifted C3, C5 Aircross hybrid and electric Relay van into their showrooms ahead of the arrival of Citroën’s first C-segment electric vehicle (EV) in 2021.

Druce will report to Groupe PSA UK managing director, Alison Jones. Jones said: “I am delighted to appoint Eurig to lead the Citroën UK team - promoting talent from within is always a pleasure.

“I want to thank Karl Howkins for his leadership with us in a key role in the business and I wish him well in his new venture.”

Karl Howkins said, “It is been an honour and privilege to lead the iconic Citroën brand in the UK. In particular, I would like to pay tribute to the excellent team. I will miss them immensely.”

Citroën UK said that Eurig Druce’s replacement as sales director will be announced at a later date.

In an interview with AM in October last year, Howkins said that Citroën retailers' future lied in sites shared with other car brands if they are to survive.

Howkins said at the time that he feared the country was heading for recession and a hard Brexit, adding that the carmaker’s scenario modelling suggested new car and van sales in the UK will fall by at least 10% and possibly as much as 25%.