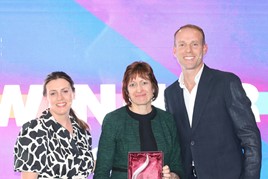 A month on from taking to the stage at the AM Awards 2020 to collect the French carmaker’s Manufacturer of the Year accolade, Jones collected her award from Cox’s UK managing director, Martin Forbes, and chief people officer, Alison Fisher, at an event last Friday (March 6).

Forbes presented the award to Jones - who leads the Citroen, DS Automobiles and Peugeot brands in the UK - in recognition of her exceptional leadership skills, strong customer and team ethos and impressive results achieved in an automotive career spanning more than 20-years.

Forbes said: “It was clear from Alison’s nomination that she lives by the traits of this award – embracing innovation and advancing the industry, inspiring others through a commitment to great leadership, and giving back to the community.

“Alison’s customer-centred approach and her determination to bring this customer focus into the boardroom was clear.

“In fact, she is also a vice president for the Institute of Customer Service, a role she has held for more than seven years representing the automotive sector.”

Now in its second year, the Barbara Cox award – run in partnership with AM and its sister title, Fleet News – is named after Barbara Cox, the business pioneer who served as director of Cox Enterprises, Cox Automotive’s parent company in the USA.

It recognises a woman that demonstrates a commitment to innovation, leadership or community, and awards £5,000 for her to spend on her own personal development.

Forbes said: “Our Women With Drive programme exists to celebrate the work of women in the automotive industry. And we certainly did that today by showcasing Alison and her inspirational leadership.

“It was an honour to be part of the judging panel – and I’d like to congratulate everyone on the shortlist.”