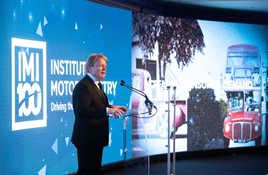 The Institute of the Motor Industry (IMI) recognised the contribution that both individuals and organisations continue to make in the development of the motor industry, at its annual Recognition Awards on March 11.

“As the automotive retail sector’s professional body we are massively attuned to the changes taking place that are affecting all our members”, said Steve Nash, chief executive of the IMI.

“That said, I’m constantly overwhelmed and reassured by the dynamism of individuals, both new and established, who are more than able to tackle the obstacles thrown their way.

"There are some real movers and shakers amongst this year’s winners and we’re all really looking forward to seeing how they will continue to contribute to the automotive industry in the future.”

The Full-time Student of the Year award was given to Naim Ahmed, who studies at Cardiff and Vale College. He is on target to complete his extended Diploma in Vehicle Refinishing despite having his learning content relayed to him in sign language by a dedicated signer.  Ahmed also received the IMI Bursary.

Hayley Pells FIMI CAE, owner of Avia, was handed The Patron’s Award: Championing Diversity in Automotive. Pells is an industry advocate who campaigns tirelessly for gender equality and industry issues close to her heart.  She persuaded the Welsh government to fund EV and hybrid training through her local college.

Andy Moore FIMI AAE picked up the Contribution to the work of the IMI award. He successfully promoted the values of the IMI via championing skills competitions and training, developing the presence of the IMI in China and fundraising for vital causes.

The Outstanding Contribution to the Motor Industry award was won by Gary Tucker FIMI, managing director of Network Training Partnership. He has, over the course of his career, inspired wide-ranging change in training provision for roadside recovery industries, increasing proficiency and safety for all.

Ian Callum CBE scooped the Sue Brownson Award for Outstanding Leadership in Automotive, while Lucas-Nülle Group was announced as Partner of the Year.

Richard Parry-Jones CBE was bestowed with the highest lifetime award the IMI can give, Honorary Fellowship.

Last year Parry-Jones was honoured with the Sue Brownson Award in recognition of outstanding leadership.

The former vice president for global product development at Ford now becomes an Honorary Fellow, in recognition of the positive worldwide impact his work has made on the industry, its workers and consumers alike.