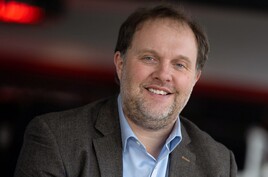 Lookers PLC has announced the completion of a recent series of senior leadership changes with the appointment of Chris Whitaker as its new chief people officer.

The AM100’s second-placed car retail group by turnover appointed Whitaker on a full-time basis seven months after he joined the business as its interim HR director and is described by the business as an accomplished Group HR director with almost 30 years’ experience.

In his new role, Whitaker will lead the company’s HR and internal communications operations, Lookers said.

Whitaker's appointment comes nine months after crisis-hit Lookers announced that it would be embarking on a reshuffle of its senior leadership team in search of ‘new skills and experience’.

The group was keen to make sweeping changes to its board as it battled to recover from the impact of a Financial Conduct Authority (FCA) investigation, internal fraud investigations and the effects of the COVID-19 lockdown.

Welcoming the completion of the restructure this week, Lookers chief executive Mark Raban said: “I’m delighted to announce the appointment of Chris Whitaker to the role of chief people officer, further consolidating our senior management team and providing a strong base from which to drive new growth and development.

“Our people are our most valuable asset and I have every confidence that Chris will continue to harness the outstanding talent, skills and experience we seek to build further on this unrivalled core strength.

“With his fresh impetus, Chris has already made a fantastic contribution to the Group and he will bring invaluable experience to the role as we prepare to safely scale up our operations again when restrictions are eased.

“I am delighted that Chris is joining our executive committee and I look forward to working closely with him in the weeks and months ahead.”

A graduate of the University of Huddersfield, Whitaker spend almost 20 years at telephone and broadband provider KCOM prior to his Lookers appointment last year.

Commenting on his new role at Lookers, he said: “I’m thrilled to be joining the senior team at Lookers at an important, exciting time in the company’s development and I look forward to assisting in delivering a new, shared growth right across our network.

“This appointment is a privilege, and I would like to thank my colleagues for their support as I embark on this new and focal role.”

Earlier this month, Lookers announced the appointment of Paul van der Burgh as a non-executive director.

He joins the board with non-executive chairman Phil White CBE and non-executive directors, Heather Jackson, Vicky Mitchell and Robin Churchouse.