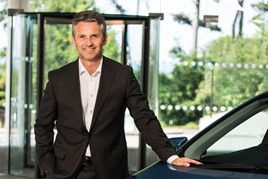 The award-winning business leader, who announced his retirement from the Japanese carmaker’s UK operation in September last year, will officially join the AM100 car retail group’s board on April 1 and will be a member of the Audit and Risk, Remuneration and Nominations Committees.

In a statement issued via the London Stock Exchange this morning (March 8), Lookers chairman Phil White, said: "We are absolutely delighted that Paul will be joining the Lookers Board next month. His track record at both Toyota and Ford speaks for itself.

“He is well known and highly respected throughout the motor industry for all he has achieved in his career.

“His in-depth understanding of our industry, combined with his extensive experience, will be a great asset to Lookers as we continue to lift the brakes on the business and look forward to the multiple opportunities ahead.

“Paul’s experience and guidance will be invaluable to us on that journey.”

Lookers described Van der Burgh as being “highly experienced in the global automotive industry”, having held senior executive positions at leading multinational brands around the world for over 35 years.

He spent 15 years at Toyota and Lexus, most recently as the president and managing director of Toyota (GB).

“Prior to this, Paul held a variety of roles at Ford in the UK and the Americas. Vander Burgh has also been an executive director of the Society of Motor Manufacturers and Traders (SMMT).”

Van der Burgh, who last featured in a manufacturer profile feature in AM back in 2016, a year after being appointed as president and MD of Toyota GB.

In May 2019 he was named the winner of an Outstanding Leadership award at the 2019 Autocar Awards.

Upon delivering news of his retirement last year, Van der Burgh, said he would be retiring to Northumberland, a region which he described as “one of the most beautiful parts of the world”.

Commenting on news of his appointment with Lookers today, he said: “I am thrilled to be joining the Lookers Board at a very exciting time for the business.

“Having spent most of my career with major global manufacturing brands, I really appreciate the importance of a strong, well located dealership network.

“I am also well aware of the changing dynamics in the market, not least through electrification and digitisation, where Lookers can further enhance its proposition and prosper in the current environment.”