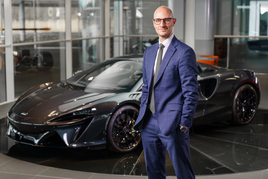 The Woking-based car manufacturer announced today (January 18) that Crossley would be “spearheading” sales and marketing operations in its home market after making the move from a role as its global head of brand marketing.

Crossley, who will report to Brett Soso – McLaren’s managing director for Europe, Middle East and Africa – in his new role, first joined the business in 2017.

He was previously employed by Peugeot, where he was latterly a strategic head of business sales, with overall responsibility for the brand’s business and fleet sales, marketing, strategic development and sales programmes.

Commenting on Crossley’s appointment, Soso said: “I am delighted to welcome Nick to the team during a very exciting time for our brand.

“Nick brings a wealth of automotive experience into the role and will be spearheading our operations in our home market with a special focus on growing and enhancing the luxury credentials of our brand, for the benefit of our retail partners, and discerning customers.”

Crossley said: “I am extremely excited to be taking up the role of market director – United Kingdom as we open an exciting new chapter for McLaren.

“The United Kingdom has been at the centre of our success over the past ten years and will be a crucial contributor to the delivery of our Horizon 2030 business strategy.

“As the home market of our brand, it is ideally placed to benefit from our vision that combines exceptional product with a class-leading ownership-experience.

“I look forward to working with our local retail partners to further grow our business, based on these values.”

McLaren’s Horizon 2030 strategy will bring about the end of production for all its internal combustion engine powertrains by 2030.

However, in announcing the plan in August 2020, former chief executive Mike Flewitt said that the OEM would not launch a fully electric vehicle (EV) until the second half of this decade, due to constraints on weight, performance and range.

Following on from the landmark P1 PHEV hypercar, a limited-run model launched back in 2015, the 570S replacement is the first model to be built on the all-new McLaren Carbon Lightweight Architecture (MCLA) built in-house at the McLaren Composites Technology Centre (MCTC) in Rotherham.