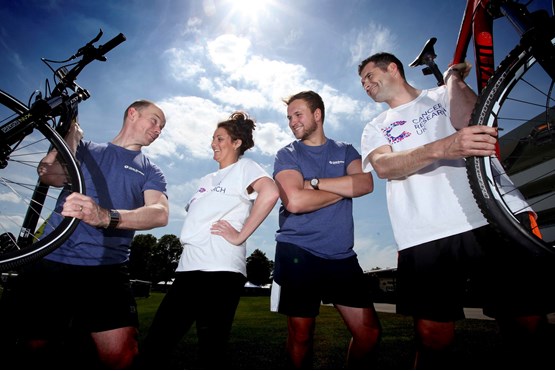 A team of eight Close Brothers Motor Finance employees are taking on an extreme three-part challenge to raise funds for Cancer Research UK.

The team is made up of employees from across the UK, including Adele Heatlie, Sam Harrison and David Grieve, who are based at the company’s head office in Doncaster, Nick Delaney from Sheffield, Rob Richardson from Northampton, Neil Richardson from York, Laura Frak from Swindon and Mareta Davies from Northern Ireland.

Team captain Rob Richardson said: “We are all very excited about taking part in the Ben Nevis challenge. However the prospect of climbing the highest mountain in the British Isles, then cycling 25 miles, and canoeing across a Loch is quite daunting, and it will certainly push us to our limits, so we’ve already started training in preparation.

“We have also been busy fundraising and hope to raise at least £12,000 for our charity partner, Cancer Research UK. We’ve organised a number of fundraising activities in the run up to the challenge including a static bike ride covering the distance ‘from York to New York’, donation stations and dress down days.

“We’ve been overwhelmed by the support and generosity of everyone so far, including Trust Ford, who have kindly supplied us with a nine seater minibus to transport the team to and from the challenge.”

Close Brothers Motor Finance chief executive James Broadhead said: “It’s great to see everyone getting involved and challenging themselves to support this very worthy cause. We’ve been charity partners with Cancer Research UK for just over a year now and so far we’ve raised over £33,600 in total.

“We also took part in a Close Brothers Group charity week earlier in May which saw employees from across all areas of the business joining in. We organised a host of activities, from a silent auction to win extra holiday days, to a group wide charity quiz, and it was a great success.”

Donations can be made, here.