British women are charged an average of £45 more than men for car repairs, according to ClickMechanic.

The online marketplace for car repairs examined independent car garages across the UK and found that a standard repair costing a man £571 will typically cost a woman £616, an increase of 8%.

Male and female mystery shoppers requested quotes to replace the clutch of a 2011 Ford Focus from 182 garages across ten UK cities. The investigation found that eight out of the ten cities charged women a ‘female premium’ and only 6% of the surveyed garages gave a consistent quote to both male and female customers.

Co-founder and chief executive of ClickMechanic Andrew Jervis said: “For every female car-owner in the UK this report will come as an unwelcome surprise. While the vast majority of mechanics strive to provide honest and reliable quotes, these results show that there is a worrying minority of garages failing to do so. There is a desperate need across the industry for transparency and consistency in price in order to establish trust with consumers of both sexes.”

Birmingham repair garages charged the highest female premium at 31%, closely followed by Manchester (28%) and Glasgow (20%). Only two out of the ten surveyed cities bucked the trend and charged men more for a repair, with Sheffield and Edinburgh garages quoting males 5% and 19% more than females respectively. 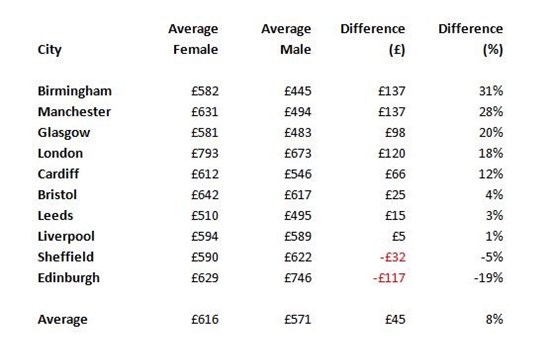 The investigation also uncovered some price-hiking across the country, regardless of the customer’s gender. On average, garages quoted both men and women £594 to carry out the work, £80 more (16%) than the £514 recommended by industry standard guidelines provided by car manufacturers, parts providers and trade bodies.