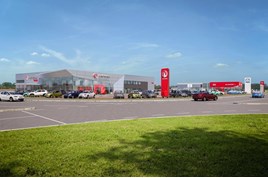 Perrys, Swansway and Sandicliffe have provided over £15 million worth of contracts to Leeds-based developer as northern boom in bricks and mortar takes hold.

Now the fast-growing business is preparing to team up with Swansway to create an all-new, £5 million Jaguar dealership at Crewe Gateway, due for completion in mid-January 2017.

John White, APP director, told the magazine: "We’ve seen strong demand from the automotive sector for some time now and we’re confident that securing these latest schemes will further raise our profile with the bigger dealers and franchises."

This followed the remodelling DM Keith Skoda outlets in, Hull, Wakefield and Huddersfield and Sandiclffe Motors’ Nottingham site under the brand’s new CI.

Skoda has started rolling out a new corporate look across its dealer network as the brand targets another record year for its UK sales.