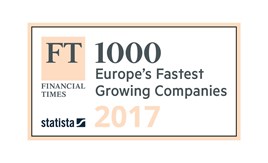 CitNOW has been ranked 176 in Financial Times fastest-growing companies in Europe.

Due to sustained growth between 2012 and 2015, CitNOW has been recognised by the FT as a company that helps keep Europe at the forefront of the business world – notably with its personalised video technology. The ranking appears in the latest FT1000, the Financial Times' top 1000 fastest-growing EU company list.

The platform has been adopted by motor manufacturers, dealership and workshop networks as the means for staff record and send personalised customer videos to customers’ phones, tablets or desktop computers via Wi-Fi.

CitNOW’s chief executive Alistair Horsburgh, said: “Recognition such as this, with the Financial Times placing CitNOW well inside the top 20% of growing businesses in Europe, is an extraordinary achievement by all concerned. The FT1000 assesses companies across the spectrum of European business, and underlines the value of what we have sought to achieve for and with our customers over the past three years.”

The business also entered the Sunday Times Hiscox Tech Track 100 at number 19, making it one of the top 20 fastest growing tech companies in 2016.

“In less than a decade, the automotive industry is likely to be unrecognisable in many ways as we see developments like alternative fuels and autonomous vehicles become mainstream. However, the growth of CitNOW is a reflection of its role in supporting the industry with this transition during which it will continue to thrive,” said Horsburgh.