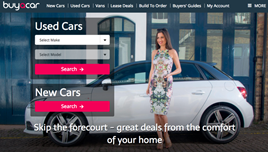 Growth in online car sales is more than twice as fast among women than men for the third year running.

The number of women ordering from specialist online motor retailer BuyaCar.co.uk has grown by 68.5% this year, compared with the same period in 2016.

The number of men buying cars online has increased too, but at less than half the rate, with an increase of 31.8% on last year.

With online car sales 48% up this year overall, it’s clear that women are now the biggest driving force for internet car sales growth in Britain.

Research consistently reveals that women are less comfortable than men in the traditional car dealership environment, increasingly turning to the low-pressure online car buying experience as their preferred option.

But BuyaCar.co.uk’s managing director Austin Collins believes that is only part of the story and that women appear to be more open-minded about new ways of approaching motoring in general.

He said: “Our research into the attitudes of car buyers across a range of issues reveals that women seem to be more pragmatic and open to new thinking, compared with men.

“We’ve found that women are more likely to think about the environmental impact of the cars that they buy, and be more willing to consider an electric car.

“Women are also almost twice as likely as men to say they’re comfortable buying a car they have never test driven.

“And despite the best efforts of many car dealerships to be more transparent and welcoming, there’s a significant proportion of women who still prefer to avoid showrooms and order online, where they feel more in control of the situation.”

How dealers are winning in the online revolution

How dealers are winning in the online revolution