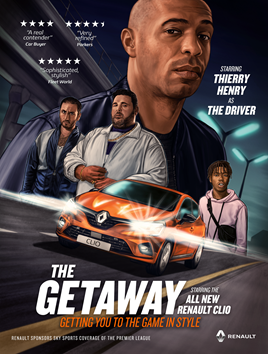 Renault and leasing.com have announced separate marketing deals that will see both brands promoted heavily on Premier League and EFL Trophy coverage.

Renault’s deal sees the French brand renew its Premier League sponsorship with Sky Sports for the next three years from the start of the 2019/20 season.

The partnership with Renault will see new TV idents broadcast in and around 128 live Premier League games on Sky Sports this season.

The new idents will showcase the Clio and Megane RS hot hatch.

Taking a tongue-in-cheek look at how fans will stop at nothing to see the match, they will once again star Renault brand ambassador, Thierry Henry. Henry will play the role of ‘The Transporter’; the slickest getaway driver in town, helping football fans escape whatever stands in their way.

Renault will receive 15 and five second TV idents in the key commercial breaks in pre-match, half time and post-match.

Across the UK and Ireland, Renault idents will also feature on Sky’s Out-of-Home feed, On Demand service and the Sky Go platform that allows fans to watch live or catch-up via mobile, tablet and desktop devices.

Renault will also sponsor digital coverage of the Premier League on skysports.com and the Sky Sports App, including video and display advertising.

Adam Wood, Groupe Renault UK and Ireland marketing director, said: “Reaching millions of dedicated fans across the UK and Ireland every week of the Premier League season, the partnership provides Renault with a chance to tap into a highly-engaged audience with broadcast as well as digital sponsorship.”

Meanwhile Leasing.com has become the official sponsor for the EFL Trophy in its own three year deal.

The exclusive partnership sees the competition become known as the ‘Leasing.com Trophy’ with immediate effect, with the deal running until the conclusion of the 2021/22 season.

As well as the title sponsorship, which encompasses all 127 matches across six rounds, culminating in a final at Wembley Stadium, Leasing.com will be an official partner with a portfolio of rights across the EFL and the EFL’s digital network.

Leasing.com, which specialises in allowing personal and business customers to compare leasing offers, has a vision to be the market-leading, trusted champion of car leasing.

David Timmis, founder and MD of Leasing.com, said: “We want Leasing.com to become a household name and what better way to achieve that than to sponsor one of the most high-profile tournaments in English football.

“Car leasing used to be viewed as something that was only available to businesses, but we want everyone to know that leasing a new car is a simple, affordable option that all drivers should consider.”