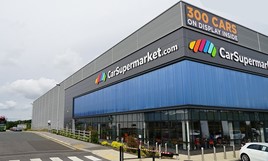 Property developer Northumberland Estates is looking for car dealers to fill two remaining showroom vacancies on its Vroom retail park on the outskirts of Newcastle.

This spring is scheduled to see the arrival of a “high-profile electric vehicle (EV) company” to North Tyneside and the opening of the new showroom at the site adjacent to the A19, north of the Tyne Tunnel, will leave just two vacant sites at the facility.

Commenting on the performance of its Vroom site Motordepot managing director, Stephen Butterley, said: “The past two years have been extremely successful for us and January 2020 proved to be the busiest month we have ever had.”

Northumberland Estates believes that the recently-completed £75 infrastructure improvement scheme carried out by Highways England has had a positive impact, making its Vroom location a great alternative to Tyneside’s SilverLink Business Park.

Michael O’Driscoll, senior asset manager at Northumberland Estates said: “The new carriageway under the A1058 has greatly improved traffic flow and left Vroom more visible. We are very excited to have secured the latest addition and are now looking for dealerships for the final 120-car and 60-car pitches.

“Vroom has the capacity for over 750 cars on site and we have the ability to expand on a 13-acre plot.

“Due to traffic congestion at Silverlink and the higher rental values of dealerships, Vroom offers a more visible and cost-effective alternative.”