Chancellor reveals driverless cars will be on UK roads by 2021 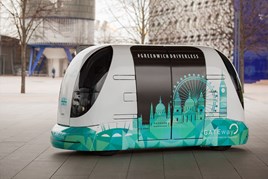 Driverless cars could be on UK roads within four years under Government plans to invest in the sector, as revealed by Chancellor.

In his budget on Wednesday, Chancellor Philip Hammond is expected to annouce that driverless cars will be able to be tested without any human operator inside or outside the car, and without the legal constraints and rules that apply in many other EU nations, and much of the US.

He told the BBC: "Some would say that's a bold move, but we have to embrace these technologies if we want the UK to lead the next industrial revolution."

Asked about the potential loss of jobs for drivers, he said the country could not "hide from change" and the Government had to equip people with the skills "to take up new careers".

Mike Hawes, chief executive of the Society of Motor Manufacturers and Traders, said it was good news that the Government was taking a lead by making the UK attractive to those seeking to develop, test and build an entirely new generation of cars.

He said: “We support Government’s measures to make the UK one of the best places in the world to develop, test and sell connected and autonomous vehicles.

"These vehicles will transform our roads and society, dramatically reducing accidents and saving thousands of lives every year, while adding billions of pounds to the economy.

"We look forward to continuing industry’s collaboration with government to ensure the UK can be among the first to grasp the benefits of this exciting new technology.”

Raj Samani, chief scientist and fellow at McAfee, added: "With its strong manufacturing heritage, it's unsurprising that the Government has high hopes for the UK to be a global leader in driverless car technology and to “lead the next industrial revolution".

"The anticipated regulation changes on Wednesday, that will allow developers to test driverless cars on the road, will be a key step forward in accelerating towards this goal.

"However, with security of these vehicles paramount to the safety of drivers and those in the vicinity, it is essential that the security of the car's network is a key priority for all car manufacturers.