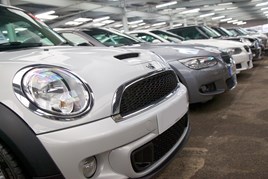 Ex-fleet car prices experienced a 4.9% price drop in May according to data collated by Cox Automotive brands Manheim and Motors.co.uk.

A monthly report issued by the trader revealed strength in part-exchange stock, with average selling prices dropping just 0.9% (£32) from April to a figure of £3,543, but an average drop of £469, to a figure of £9,183, for ex-fleet vehicles.

The overall average selling price for cars at Manheim’s auctions in May held firm compared to the previous month with a marginal drop of just 0.2% (£8) realising a May average figure of £5,278.

The statement issued by Manheim added: “While cars from volume brands saw average selling prices increase in the Manheim wholesale market in May, rising by 4.2% (£166) from April, there were increases across the board in the retail market, with data from Motors.co.uk showing a 3.3% (£322) rise in average selling price for volume brands, 8.6% (£1,704) increase for prestige marques, and a 5.4% (£3,170) lift for luxury cars.”

Month-on-month average selling prices for cabriolets and convertibles do not seem to have suffered in light of the recent inclement weather, with prices in the wholesale market up by 4.2% (£243) and 0.9% (£73), respectively, and roadster prices holding firm.

May saw a further increase in the average selling price of an EV.

“Petrol cars showed strength in both the wholesale and retail markets, with data from Manheim showing a 2.0% (£69) increase in prices and Motors.co.uk reporting a 5.7% (£532) increase in average selling prices, compared to April.”