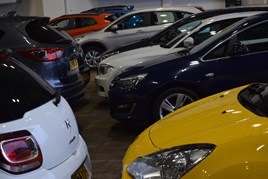 Cox Automotive saw year-on-year increases in selling prices in both the wholesale and retail used car markets in January.

Average mileage for cars sold at Manheim was 5.9% below January 2016 – recorded at 62,247 – as younger, lower mileage stock continues to enter its auctions, the remarketing business said.

Daren Wiseman, head of valuations at Cox Automotive UK, said: “We saw strong buyer activity right up until the end of last year, which seems to have continued into 2017. Despite significant increases in volume, buyers have been out in force to support the strong activity in the retail market.”

In January, the average selling price of ex-fleet cars at Manheim was £8,990 and for part-exchange dealer stock it was £3,747.

Part-exchange cars saw a 4.9% year-on-year increase in prices, with volumes falling by 7.8% compared to January 2016.

Ex-fleet cars recorded an increase in sold volumes of 6.2%, with the average selling price 7.5% below the same month last year.

Volume brands performed well in the January wholesale market, with prices up 6.3% from the first month of 2016.

SUV prices were also up year-on-year, by 2.4%, and perhaps as a result of a relatively mild December, the average selling price rose by 38% month-on-month.

A statement issued by Cox Automotive said that both Manheim and Motors.co.uk saw double-digit month-on-month growth in sales volumes in January, so there was an expected softening in prices compared to December, with average selling price at Manheim down 2.7% and a 4.3% drop for cars sold on Motors.co.uk.

Wiseman said: “Manheim is continuing to focus on providing the best value for buyers, with its improved SureCheck pre-auction inspection and award-winning processes to ensure vehicles are inspected, prepared and presented in the best possible way.

“Over 30% of cars sold by Manheim in January were sold to online buyers, underlining the confidence that dealers have in our online sales channels.”

Dermot Kelleher, director of marketing and business intelligence at Motors.co.uk, said: “We have seen stability in the used car market at the start of 2017.

“At Motors.co.uk, we saw organic search visits to our website rise by 17% year-on-year, and across our Network of partner websites, average leads per dealer were up 13% from January 2016, which is great news for dealers advertising with Motors.co.uk.”