Lexus leads the way as fastest seller on Wizzle

Lexus is the quickest used car brand for Britain’s motorists to convert into cash as dealers snap up forecourt stock, according to new figures compiled by Wizzle.

The online platform which aims to bring dealers who need stock for the forecourt together with customers who have cars to sell has found that all cars have been selling faster this year than at any point since last September as dealers rush to replace stock flying off the forecourts – but some are going faster than others.

Lightning fast Lexus sales have seen the Japanese brand’s products fly off the forecourt in just 24 hours compared with an average of 4.2 days across all car brands, Wizzle said.

It might not all be down to dealer demand, though. Wizzle’s team believes that other cars may be taking longer to sell because their owners are more picky over the price they are prepared to sell for.

Citroen owners take the longest of all to agree a sale, taking on average almost two weeks to part with their car for a cash payment.

In contrast, cars from Citroen’s French counterpart Peugeot sell within an average of 4.1 days. Both brands account for around 6% of sales on Wizzle, so the gap between their selling times is unrelated to differences in supply.

Wizzle said that it found no relationship between market share and the time taken to agree a sale.

Ford are the most common cars sold on Wizzle and take the third longest time to sell – but Vauxhall, Audi, Volkswagen and BMW account for a total of 77% of sales and all sell between 36 hours and two full days quicker than the average Ford.

Founder of Wizzle, Sébastien Duval, said: “At first we expected higher value cars to take the longest to sell because their owners might negotiate harder over an acceptable selling price, but there is no sign of that.

“We think the time taken to agree a sale may be closely related to some owners’ unrealistic expectations of the market value of their car when they initially offer it for sale.

“Sometimes it might be the shock of discovering how much their car has depreciated and the seller has to take time to adjust to a more realistic view of its value.

“As well as Citroen owners, Mercedes and Land Rover drivers also tend to have higher expectations on price when they first put their car on sale and that translates into longer listing times too.

“But there seems to be no obvious relationship between the actual cash values of cars and the time it takes to agree a sale.” 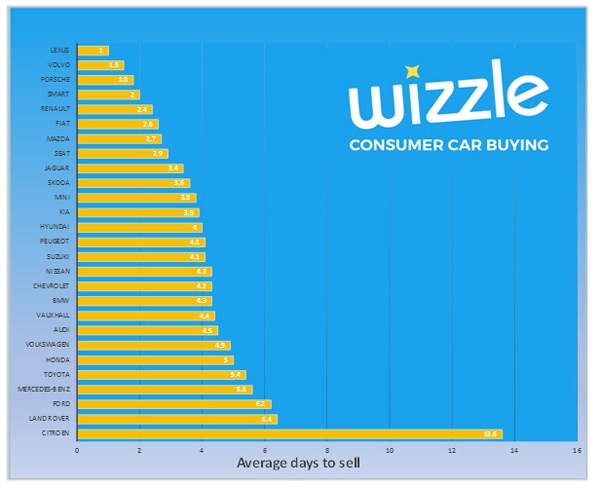