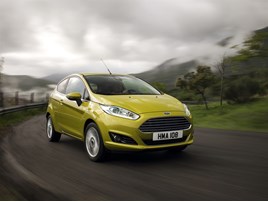 The Ford Fiesta remains the UK's favourite used car for both the wholesale and consumer market, followed by the Ford Focus and Vauxhall Corsa, according to Cox Automotive.

Its head of external relations Philip Nothard said: "Dealers have been savvy over the past 12 months, and respected the adoration that consumers have for the humble Fiesta.

“It has remained the top used car sold through Manheim auctions in 2017 and was listed 218,320 times on Motors.co.uk. Plus, Cox Automotive's financing business, NextGear Capital, also recorded the model as the most funded model of the year.

"Looking at the top 10, German brands continue to dominate the market, with BMW, Audi, Volkswagen and Mercedes all included.

"Not only is it testament to their ability to produce vehicles with superb handling and steering capabilities combined with maximum safety and style, but it also shows they generate continued brand loyalty, as consumers continue to swap like-for-like when buying a new vehicle."

"Looking ahead to 2018, dealers focusing on black Ford Fiestas will undoubtedly reap the rewards, but we shouldn't dismiss the rise of middle range SUVs.

The Nissan Qashqai and Juke both made an impact on the top 10 cars on Motors.co.uk in 2017, and dealers would be wise to invest."

And for the “first time in years” the colour white has dropped to the nation’s second favourite for used cars, with black taking the top spot.

Silver, blue and grey completed the top five, according to the data released today by Cox Automotive, which looked at the top selling used cars through its Manheim auction lanes and car sales website Motors.co.uk.

The move to black follows predictions made by the SMMT in January 2017 that customers would go back to black, following years of white dominating the new and used market.

"Red will always be a 'love it or hate it' colour, but it's proved a mainstay in the top ten for the last twenty years."

"However, when it comes to colour, despite Lamborghini launching their new Urus in yellow, and Aston Martin and Ford investing in green for their new V8 Vantage and Mustang Bullitt models, these louder colours may only attract a small audience."It's likely that in the main, black will be back for a few years yet."