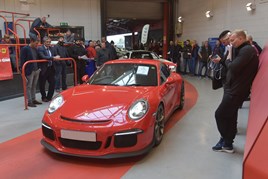 Supercars and luxury vehicles often outperformed valuation expectations to feature strongly among the most impressive performers at auction during 2017, according to BCA.

The remarketing specialist sold a range of vehicles from the luxury and supercar sectors for over £100,000 last year and generated strong interest from online bidders for the big money investments.

BCA reported that around 65% of these high-value cars were purchased by Live Online bidders, with the balance being brought by in-lane buyers, as the vehicles' sold price often outperformed price guide expectations by up to 18%.

The highest prices achieved at BCA auctions in 2017 are:

“This data showed BCA experienced high demand across these high-value sectors with exceptional interest for some of the rarer supercars, that attracted buyers from all over the UK and Europe.

"It also underlines that there is plenty of confidence from our buyers to purchase these ‘top end’ vehicles.”