Activity in the used car market during February has been reasonably good despite the interference of the poor weather conditions during the final week.

Retail demand has been consistent and consumer buyers have been focussed on family cars and SUV product.

Premium brand offerings have also been in specific demand.

As a direct result there has been some difficulty in sourcing quality stock, particularly as de-fleet levels during February are lower for business owned vehicles in the run up to the plate change.

The chart below shows performance of petrol to diesel vehicles in the wholesale market place as the industry continues to pontificate over the two fuel types.

This data is a top-level view of Cazana Remarket values expressed as a percentage of original cost new (OCN) over the past 12 months. 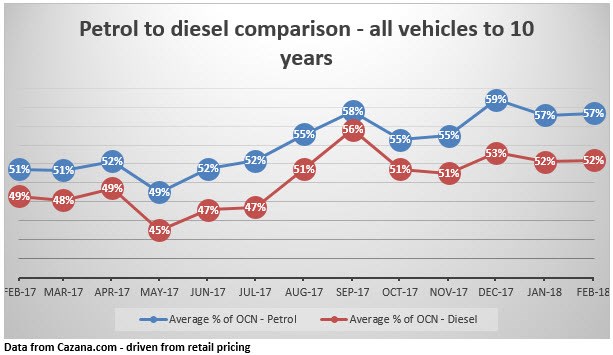 The chart clearly shows that there has been more strength in petrol residual values over the last 12 months although the gap between petrol and diesel has remained reasonably consistent until the last quarter of 2017.

This coincides with the reduction in new diesel cars sales and the hiatus in press speculation over the future of the fuel type and the damage emissions have caused to the populations health.

Development of battery and hybrid technology is moving swiftly as is the public’s perception and reviewing market data on a monthly basis will ensure a clear and accurate understanding of what is a difficult sector starved of data due to low registration volumes.

The chart below shows how AFV’s have performed from a value perspective as a percentage of original cost new over the last 12 months. 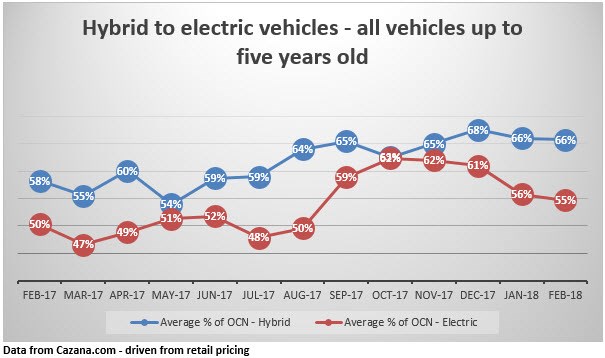 There is quite a variance in the values as a percentage of OCN month on month although the year on year figures show a notable strengthening of values.

The 15% delta across the year for electric vehicles is part explained by the type of stock coming to the market.

Demand for lower range Renault Zoe in comparison to a BMW i3 or Tesla has a significant effect on values as do supply constrictions.

Finally, a view of the ex-PCP market clarifies that at the moment whilst anecdotal evidence suggests that too many cars are flooding the market this is not quite the case overall.

The chart below clearly shows consistency in values only supportive of good retail consumer interest.

The decline in diesel values is notable on this chart and is one of the few current indicators of specific decline.

It is important to note that this is a high-level view and researching specific models and market sectors will show both strengths and weaknesses of individual cars and types.

In summary the last month has seen stability and demand in the used car market overall. Even the weather did not make a significant impact on used car sales in many places.

However, the devil is in the detail and greater focus on specific parts of the Cazana database can help drive performance and sales success.