Diesel-powered used cars have risen 5% in value on Auto Trader during April, despite the proportion of online searches for diesel falling to an record low.

Signs that consumer interest in diesel cars is continuing to decline were once again apparent in Auto Trader’s monthly Retail Price Index, but the average price of vehicles which burn the fuel generated a year-on-year rise of 5%.

This came against the backdrop of a 7% rise in the overall average price of a used car on Auto Trader on a like-for-like basis, however.

The average price of a used car in April was £12,769. This represents the fastest level of price growth since this data series began in January 2011, according to Auto Trader.

On a like-for-like basis this represents a 5% increase, and the fastest rate of growth since September 2014, Auto Trader said. 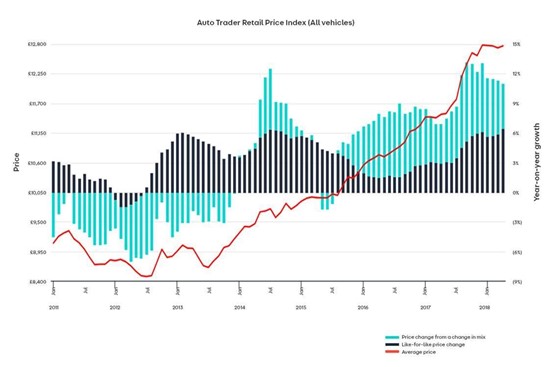 However, the proportion of searches for diesel vehicles on the platform fell from 51% in March to a record low of 50% as consumers moved towards petrol vehicles.

Searches for diesel vehicles have fallen dropped from a high of 71% in November 2016.

Karolina Edwards-Smajda, Auto Trader’s retailer and consumer product director, said: “We’re confident of a healthy pricing environment in used – our data shows that average prices of used cars are continuing to rise, across both petrol and diesel.

“Younger cars under a year old were a partial driver of the overall increase, suggesting that falling new car registrations could be tightening supply and helping to drive up second hand values.”

Edwards-Smajda said that the ongoing fuel debate and Brexit-related uncertainty mean a challenging landscape for retailers this year, but added that Auto Trader believes that greater finance penetration will continue to fuel the market.