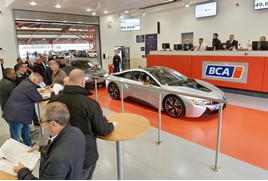 Used car values rose in November as “buyers competing strongly for stock both in-lane and via BCA Live Online” drove stiff competition for stock through BCA.

The omni-channel remarketing specialist reported that the average value of a used car sold via its physical and online auctions last month rose by £83 to £9,866, the third highest figure on record.

According to the monthly BCA Pulse Report, the headline figure was up by £462 year-on-year, equivalent to a 4.9% increase in average values. 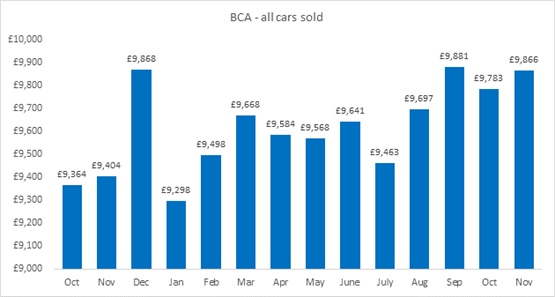 Stuart Pearson, BCA’s chief operating officer for UK Remarketing, said: “There were good levels of confident trading activity at BCA during November across all sectors, with both high volume buyers and independent dealers competing for stock.

“This has carried on into December as professional buyers look to build stock levels for their retail forecourts in the New Year.

“To meet this demand, BCA has a comprehensive program in place right through the final week before Christmas and in addition, buyers will also have the choice to continue to buy through our digital sale platforms during the Bank Holiday period.”

Pearson added “BCA has seen values rise steadily during 2018, with professional buyers competing strongly for stock both in-lane and via BCA Live Online.

“Underlining this, fleet and lease values have reached record levels six times in 2018, while record values for dealer part-exchange cars were set for nine months in a row this year.”

BCA reported an average £11,682 value for its fleet and lease stock sold during November.

“The retained value against original MRP (Manufacturers Retail Price) slipped by just a percentage point to 44.78%”, the report said.

Dealer part-exchange values slipped by just £46 during November to £5,289 as both the mileage and age of vehicles rose over the month.

The overall rise in average values in this sector remained second highest value recorded at BCA for dealer stock, however.

Year-on-year values were up £587, representing a 12.5% increase over the 12-month period with age and mileage decreasing.

Demand pushed the values of nearly-new vehicles up during November with strong competition for the most desirable vehicles.