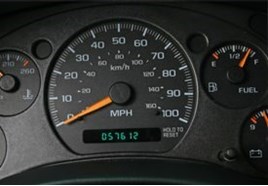 A study of vehicle mileage data from one million cars has found that 6.5% of vehicles in the UK could have been clocked.

The issue was uncovered by Rapid Car Check, which provides a free checking tool that highlights mileage discrepancies recorded between MOT tests.

With some 38m cars on the UK's roads, Rapid Car Check says this equates to around 2.4m vehicles.

On average, vehicle mileages were reduced by 70,000 miles in the cases where discrepancies were found.

The Renault Scenic and Grand Scenic were found to be the most affected cars, with the highest volume of recorded discrepancies. Although, these cars were known to suffer with a faulty instrument cluster which may have been replaced legitimately in a number of cases.

Ford’s Fiesta and the Nissan Qashqai – both UK top-sellers – were among the cars least likely to have a mileage discrepancy.

Older vehicles – those registered between 1995 and 1999 – were found to have the highest proportion of discrepancy.

As this study only looked at recorded mileages at the time of the MOT test, it does not account for vehicles that were clocked prior to a test, such as those that are less than three years old, and therefore does not give a truly accurate representation of clocking.

However, the Local Government Association believes there is a record number of clocked cars on UK roads. Its data paints a similar picture to the findings by Rapid Car Check, suggesting more than two million cars now feature fraudulently altered odometer readings following an explosion in the number of motorists taking advantage of mileage correction services.

In 2017, the NFDA warned that Record numbers of PCP agreements could prompt a car clocking crisis in the motor trade as motorists look to shed miles in a bid to beat the deal’s final balloon payment.