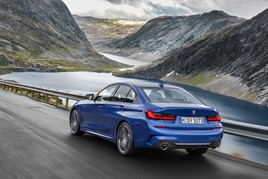 German brands dominated the most viewed vehicles on Auto Trader in 2019.

Analysis of over two and a half billion advert views on its marketplace last year revealed that the Volkswagen Golf was the most popular new car model, while the BMW 3 Series topped the list as the most viewed used car.

Ian Plummer, Auto Trader commercial director, said: “Though there are certainly some notable exceptions, most volume brands had another challenging year in 2019 and, as a whole, have not kept to the same pace as the premium brands for several years now.

“When it comes to the most popular cars on our marketplace in 2019, the premium German brands dominate.  Their success has been fuelled by strong residual values that help them benefit from the continuing dominance of finance sales (accounting for more than nine in 10 new and nearly four in 10 used car sales), making these more expensive models increasingly more accessible to a broader range of car buyers.

“As such, it’ll be interesting to see how well the volume brands will be able to develop their own residual values over the medium-long term to sustainably deliver the sales growth they need.”

Analysis of the ad view data show that interest in brand new EVs is starting to overtake that for petrol hybrids, with the all-electric Audi E-Tron receiving 7% more views in 2019, compared to the most popular new hybrid, the Toyota Corolla.

However, in the used market, the most popular used EV, the Tesla Model S, has some way to go if it’s to catch the most viewed hybrid, the Toyota Prius, which received 12% more ad views than the Tesla last year.

Plummer continued: “The fact the most popular brand new EVs are receiving more views than their petrol-hybrid counterparts could be attributed to a number of factors, not least the huge advancements in range capabilities, performance and stylings, but also improvements to infrastructure.

“Coupled with the cut in available grants for plug-in hybrids, these have all resulted in a significant step-change in consumer attitudes towards buying a new electric. It’s curious to see that this is yet to translate to the used market, where concerns about battery life-spans and high price tags continue to push second-hand buyers towards more tried and tested hybrids which remain very good value.”