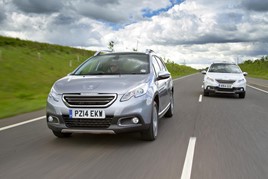 The Peugeot 2008 is currently the UK’s fastest selling used car, according to Auto Trader, as demand for SUVs grew by more than 40% since forecourts re-opened.

Diesel examples of the 2008 with an automatic transmission were the most popular, taking an average of just 26 days to turn on UK forecourts.

Consumer appetite for SUVs shows no sign of abating, with six making it onto the national top 10 of fastest turners.

The 2008 is joined by four variations of Mazda’s CX-5 SUV, as well as the Dacia Duster.

There has also been an increase in demand for coupes and convertibles in recent weeks. The Peugeot RCZ is fourth on the list, while BMW Z4 variants round off the top ten list in eighth and 10th place.

Auto Trader’s director of commercial products Karolina Edwards-Smajda said: “Even after seven weeks of forecourts reopening in England, demand remains exceptionally high with an average of 1.4 million people visiting our marketplace every day, which is 19% more than this time last year. This is reflected in the speed of sale retailers are experiencing on their forecourts, with the average days to turn back to pre-COVID-19 levels.

“The latest results highlight the enduring popularity of SUVs.”

Analysis of the used cars that took the longest to leave forecourts revealed nearly new plug-in hybrids to be among the slowest selling used cars in the UK.

With economic uncertainty a concern for many consumers, Auto Trader said the comparatively high sticker price of a low emission vehicle remains a major barrier to entry for many car buyers.