Rare Porsche collection to be auctioned by Collecting Cars (photos)

A collection of 38 vehicles, known as The Leonard Collection, are being auctioned with no reserve by Collecting Cars.

Among the lots available via the online platform are 23 Porsche models, including a Fayence Yellow Carrera GT that has already attracted bids of more than £650,000.

The auctions close for bids on Sunday May 16.

Highlights of the collection include a 1991 Porsche 964 Carrera RS that has never been registered and has a mileage of just 164km. There is also a 1973 911 Carrera 2.7 RS up for grabs, which was the first coupe to wear a ‘Rennsport’ badge. It was previously part of a collection owned by Jamiroquai frontman, Jay Kay.

A rare right-hand drive Porsche 997 GT3 RS 4.0 is offered for sale too, finished in Carrera White. 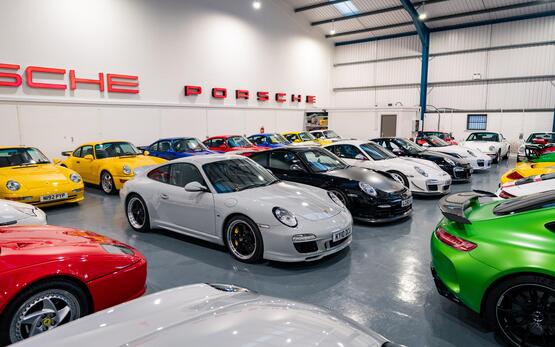 In addition to the Porsche models on offer, a further 15 vehicles are being sold as part of the collection, which include a 2004 Ferrari 360 Challenge Stradale and 2008 Ferrari 430 Scuderia, two examples of the rare 1990s F512 M supercar, a fully restored 1972 Chevrolet Corvette ‘Stingray’, and a sensational 2005 Ford GT with every factory option.

Edward Lovett, founder and CEO of Collecting Cars, said: “It has been our pleasure to work with the seller of The Leonard Collection to bring these exceptional cars to market on the platform, and all at No Reserve. It is an astonishing offering from a passionate enthusiast who has spent years sourcing the highest-quality examples available, and there is no doubt the cars will capture the imaginations of our global audience of bidders.”

Some of the cars in The Leonard Collection have been only sparingly driven and preserved, while many have been fully enjoyed as intended and kept fastidiously maintained.

All the vehicles are offered with No Reserve, the auctions close for bids on Sunday May 16. The Leonard Collection can be viewed at: www.collectingcars.com/leonard