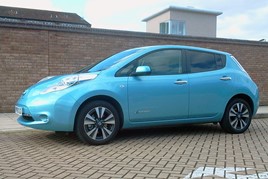 The Nissan Leaf has topped Auto Trader’s Fastest Selling Index for 2021, with the average example taking just 17 days to sell from dealer forecourts.

It marks the second time an electric vehicle (EV) has topped the annual top 10 list during the seven years Auto Trader has monitored the market’s fastest sellers. In 2019, the Renault Zoe was recognised as the fastest selling car of the year.

The Index, which tracks the potential speed at which vehicles will sell based on live supply and demand in the market, reflects the recent surge in demand for electric and low emission vehicles.

Auto Trader’s commercial product director, Karolina Edwards-Smajda, said: “It’s incredibly positive to see a pure electric at the top of the list for 2021 for just the second time in the seven years we’ve been tracking the fastest selling used cars.

“There’s been a real breakthrough for EVs in the UK over the last few years, but 2021 really did mark a major step forward in terms of heightened levels of demand. This was driven, in part, by the greater choice and availability of models, as well as the recent fuel shortage which helped to further accelerate consumer consideration.

“Although we’re still some way off EVs being financially accessible for the mass market, our data does offer another clear sign of things to come and the exciting opportunity that electric vehicles represent for the industry.”

Four of the top 10 fastest selling cars in 2021 were electrified, with the Zoe placing seventh this year, it was joined by Toyota’s hybrid-powered Prius (second) and Yaris (sixth). The rest (see list below) were all diesel.

Auto Trader’s data shows, on average, a used EV in December sold in 26 days, which is eight days faster than the average time it takes for a used petrol vehicle to sell (34) and four days faster than a used diesel (30). This is a drop of 18 days from the start of 2021, where used EVs were taking an average of 44 to sell on UK forecourts.

The Nissan Leaf has been on sale for more than a decade and was one of the first affordable EVs to offer the space and practicality of a family car.

In a recent interview with AM, Nissan GB MD Andrew Humberstone said he believes Nissan dealers have an advantage through their experience in selling used EVs and are “well positioned” to address any prospective buyers’ concerns about range and charging.

Further highlighting the increased appetite for electric vehicles, Auto Trader’s data shows that engagement in electric cars on its site is up 74% year-on-year, whilst one in five new car searches on its marketplace are for an EV.

Topping the list for the most viewed EV last year is Ford’s new fully electric SUV, the Mustang MACH-E, which fended off stiff competition from the already iconic Hyundai Ioniq 5, and Volkswagen ID 3, which came in second and third place respectively.

Nissan will expand its EV line-up this summer with the arrival of the new Ariya. The crossover offers a range of up to 310 miles, depending on version, and is priced from £41,845. Orders are already being accepted for the Ariya, ahead of its official launch.