The Government’s Open Banking initiative could see the banking industry as we know it turned on its head.

These new rules will see the UK’s largest banks sharing detailed customer data with approved third parties in a bid to increase competition and disrupt a traditionally staid sector.

Despite some concerns around security, the scheme has broadly been welcomed as a boon for consumers who will benefit from knowing how their data is used as well as introducing more transparency about how high street lenders calculate the likes of interest rates.

The impact of this scheme - which is yet to be seen - will likely have a wide-ranging effect on other industries that have traditionally benefited from keeping a distance between their own ‘secret sauce’ and their customers.

Car buying is one sector that has profited from increased data transparency over the last few years but there’s reason to think that the industry could go further.

While Open Banking doesn’t offer a direct parallel, it’s fair to say that any model that expounds data sharing is a useful point of comparison for the car buying industry.

Consumers and dealers have gained from the rise of online price comparison sites as buyers are now armed with more information before they head down to the showroom, having a better idea of the price they’re likely to pay for certain models and ages of cars means that prospective vehicle hunters can feel more confident that they’re paying the right price.

Confidence is key in bridging the issue of trust that continues to surround car dealers, so it’s in both parties’ best interests that information around the transaction is as detailed as possible.

One area that continues to blindside both dealers and buyers though is a lack of comprehensive service history data.

While digital systems, such as the AA’s Automyze, have given customers tools to track their car’s service history, we’re still very much in a transitionary phase.

As it stands, there is no consistency in how a car’s service data is tracked. This catches out both used car dealers and consumers, who’ve ended up purchasing vehicles that have turned out to have underlying issues that haven’t previously been recorded.

Buying a car without a full service history might save you money in the short-term, but it could mean you get caught with a large service bill down the line when some undocumented problem crops up.

While the issue of car service history data is still a cause for concern, there are other areas involving the ‘opening up’ of data that could greatly aid dealership processes.

The advent of connected cars, for example, and improved machine learning will allow dealerships to identify behavioral patterns that will, in turn, help them to serve customers - that have consented to have their activity tracked - with cars that better suit their needs.

For customers who dread the process of buying a car, dealers having a decent idea of what a consumer needs before they arrive on the forecourt could take the sting out of the process.

This does, however, raise the age-old concern of security around personal data - something which the Open Banking initiative has found particularly tricky. While consumers will no doubt cheer the greater availability of historical data, companies having access to customer data is a completely different matter.

The arrival of the EU General Data Protection Regulation (GDPR) - set to land in May - will make it clear that consumer data belongs to the customer themselves.

Greater availability of data will undoubtedly improve how the market operates, but customers need to be reassured that their information is safe, secure and is not going to be shared with anyone without their approval.

While there’s no silver bullet fix to these issues, it’s clear that access to data poses new opportunities and challenges for dealers.

Overall though, anything that improves transparency will ultimately improve the landscape for dealers and their end customers. 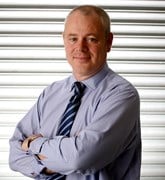 The case for cameras in showrooms - a guest opinion

The case for cameras in showrooms - a guest opinion