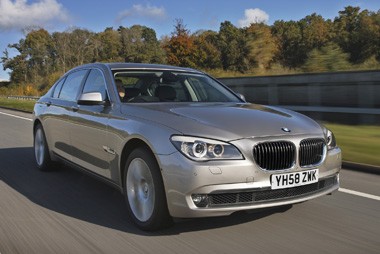 Most company directors have a lot on their plates right now, making tough decisions to make their company fit to survive the recession.

With so much on their minds, choosing a new company car might be well down the list, if there at all.

But if they had the opportunity to sit in the back of a BMW 7 Series and work on their survival plan while being driven to meetings, they might bump it up a few notches.

Inside, the new 7 Series is a very nice place to be.
The last-generation 7 Series was beset by a major hitch from day one – its Chris Bangle design, particularly the rear end, was poorly received.

BMW’s designers have no worries about its replacement.

The new model has bold, sweeping yet inoffensive styling, with an almost coupé-like side profile. It certainly matches its rivals now for executive style.

The interior is suitably plush, with stitched leather upholstery and high-quality plastic and wood trim. Occupants will find themselves surrounded by technology, whether they’re perched in the driver’s seat or lounging in the rear.

Up front, the iDrive multimedia interface has been simplified. No longer must drivers push and pull the big silver wheel to access every function, instead shortcut buttons take them straight to frequently used controls on a 10.2in colour screen.

Owners can upload their favourite music to store on a 12GB section of the car’s 80GB integral hard drive.

A head-up display also depicts the vehicle’s speed, the speed limit for the current road, and any navigation instructions on the windscreen in the driver’s eye-line.

Plenty more gadgets are on the options list, such as side-view bumper-mounted cameras to aid vision when pulling out of junctions, a system to highlight pedestrians at night, lane departure warning and a rear occupant entertainment system with 9in screens. BMW ConnectedDrive will enable passengers to browse the internet while travelling.

Average spend on options by 7 Series buyers is around £10,000, according to product manager Dave Tuckett.

Market conditions have led BMW to downgrade its 7 Series annual sales forecast from 2,000 to 1,400 units.

Customers will typically include chauffeur businesses and company directors or other senior managers. That means the diesel variant is expected to account for 85% of sales.

The 730d is such a superb car that the petrol-engined 740i and 750i are irrelevant to all but only the most fervent anti-diesel boardroom dinosaurs.

Long-wheelbase versions, providing extra legroom for rear passengers, are already available with petrol powertrains, with the diesel joining them in spring 2009.

The 7 Series isn’t all about hi-tech onboard entertainment and relaxation – it lives up to the BMW brand ethos of being very good to drive.

All variants come with Dynamic Drive Control, which allows the driver to select comfort, normal and sports settings, depending on the level of feedback and response desired.

Stick it in comfort mode and occupants will almost be wafted along to sleep, such is its smooth ride quality and gentle, yet steady, power delivery. Select the sports setting and the car becomes noticeably more responsive and fun.

All three engines are lighter and more efficient than the outgoing versions – the 730d’s 192g/km CO2 emissions are now lowest in the segment and it returns almost 40mpg, according to BMW’s figures.

The new model also benefits from use of aluminium sections to reduce weight, and has BMW’s EfficientDynamics technology, including brake energy regeneration.