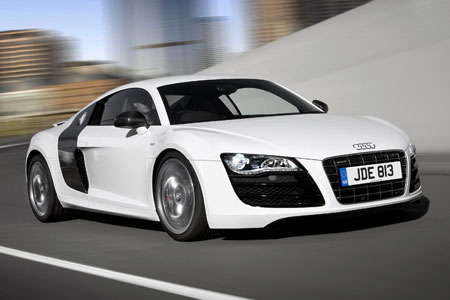 Twenty years ago motoring hacks would’ve chuckled into their notepads at the suggestion Audi dealers might one day poach sports car customers from Aston Martin and Porsche.

In five years, 1,771 V8s and 868 V10s have been registered. Audi has succeeded in competing in a market segment that’s driven by desirability, performance and exclusivity.

The R8 passes all elements of the supercar test.

It looks great, with lithe, aggressive bodywork, carbon fibre side panels and that monstrous V10 engine visible through the rear glass.

It drives beautifully and has more performance than many drivers will know what to do with. It has plenty of equipment and refinement as expected.

Finally, under heavy acceleration it made my rollercoaster-mad wife scream and my car-mad stepson giggle hysterically – both clear signs of this car’s ability.

It shares the same V10 as the Lamborghini Gallardo, though the unit has been de-tuned very slightly to tame the beast.

Tame it is indeed, because this R8 is one which customers really could use on a daily basis, providing the £130 tank fill-up every 400 miles doesn’t put them off.

The 525bhp engine is so flexible, so well-mannered that it’ll happily let the car cruise around all day at barely 2,000rpm if required, before calling in the riot squad when the opportunity to hit 8,000rpm arises.

Talking of which, overtaking through second into third gear at 8,000rpm must be one of the most exhilarating events ever, thanks to the crisp gated gearchange and glorious sounds from that huge engine behind the cabin.

Apparently it even made my wife’s S-Max recoil in shock as it overtook.