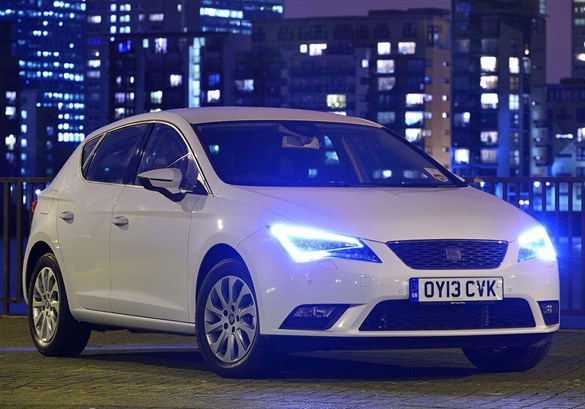 Seat is in the news this month. The consumer motoring brand Auto Express voted the Leon its car of the year this month, as well as giving it the best compact family car award.

The Leon is getting the brand name heard above the din in the crowded consumer magazine market, which is translating into success in the showroom.

Seat has pitched the Leon against the Focus, Astra, Megane and Cee’d but it is also proving a match against the premium brands. The Leon FR won an Auto Express group test against a BMW 118 and Seat says it sees evidence of similar choices being made in the showroom.

It’s a notable achievement for the brand whose then CEO James Muir said earlier this year that international sales would need to double in order to survive long-term and get the Seat voice heard within VAG Group.

Seat’s UK market share is at an all-time high of 1.96%. The Leon is playing its part in this, with 5,088 sold to the end of June this year. Sales are expected to improve for the rest of 2013 thanks to increased publicity and the addition of the three-door SC.

Style is important to Seat as it is positioned as the VW Group brand offering a distinctive, “young-spirited” appeal not naturally associated with Volkswagen or Audi. While the Leon is a fantastic-looking car, this is subjective. More objectively, Seat believes its full LED headlights are swaying buyers in its favour.

The Leon is the first vehicle in the segment with them – Audi has them as options in the A6, A7 and A8 – and to make them affordable.

To entice customers, LED headlights are bundled in a tech pack with sat nav and digital radio, adding up to £2,000 worth of options sold from launch for £500 and this month made free of charge.

The engine range is efficient across the board also. The 1.6TDiI we drove is the cleanest, but the biggest strides, says Seat, have been made with the 2.0TDI 148bhp engine, which despite almost 50% more power, emits just 7g more of CO2 (106g/km) and achieves nearly 70mpg on the combined cycle. Upgrades to the three spec grades – S, SE and FR – include a 10-speaker sound system at £220, safety pack for £115, alloy wheel upgrades at £350 and a winter pack also for £350.

What’s been said about the Seat Leon

We love its style, the way it drives, the quality and the kit. Best of all, you get all that at a bargain price, while running costs will be ultra-low, too. The Leon has beaten some superb cars to be crowned car of the year - it’s that good.

The Seat Leon is an impressive family car that’s practical, stylish and good to drive. Pick the right version and it’s tough to beat for the money.