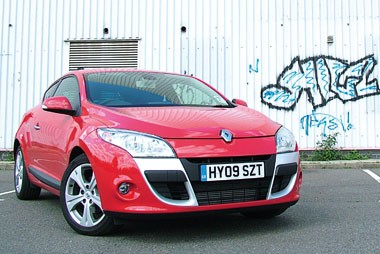 Renault is lacking the badge reputation of its Megane Coupé rival, the Volkswagen Scirocco. However, put this aside and there is much to recommend it.

On price difference alone, the Renault wins hands down, undercutting the Scirocco by £800.

Handling is superb – smooth on motorways and B-roads alike, around tight bends and for long-distance cruising.

As a diesel, it has good economy (44mpg is the test average) but has the power and refinement of a petrol engine.

Qualms include a tricky sat-nav system where postcode input seems unavailable (or very hard to find) and poor offside visibility over your shoulder.

Rear parking sensors seem strangely absent in what is otherwise a well specced car. This is one of many opportunities for dealers to upsell on the coupé.

There are four packs that customers can add on, including the hands-free pack for £500, the Xenon headlights pack for £650, Sunroof Plus for £800, which includes 4x15W radio CD with Arkamys 3D sound, fixed sunroof and hands-free Renault card and the £900 convenience pack which features a fixed sunroof, front and rear parking sensors, tyre pressure monitor and heated seats.

It’s the perfect car for young professionals who want something good-looking but not showy.

Renault said its target customer is young, male and a manager living in the city with an active social life.

The coupé will go far in helping the image of the Megane generally and the broader Renault brand, which year to date is 47.7% down on sales.

I could barely look at the ugly backside of its predecessor – this reincarnation heralds a new age for this C-segment car which makes it far more saleable.

Dealers should sell it as a good all-rounder with looks, practicality, strong spec and good value for money.