Hatchbacks always look better in three-door guise than five-door. Three doors says sporty coupe whereas five says practical family. With the new A3 Sportback, Audi is attempting to “redefine the sector” but can the creator of the premium compact really make a five-door as appealing as a coupe?

The manufacturer is trying to get away from the idea of superimposing a couple of extra apertures onto a coupe body by launching a new shape and a new name – Sportback sounds better than ‘sort of small estate that can’t quite make up its mind’.

Styled as a mini estate it will appeal to people who want an Avant and to traditional hatchback buyers. It’s also arrived at a critical time for Audi, with the much-lauded BMW 1-series being launched in the same month.

The new rear look works well and distinguishes it from the standard A3. There are also changes at the front where the new one-piece grille, first seen on the A6, brings it in line with the new Audi family face.

The interior look is clean and modern with quality plastics and stylish details. But while the Sportback may be 8cm longer than the three-door, there is only a small increase in interior and luggage space (an extra 20 litres but the rear seats don’t fold flat) and rear leg room is not overly generous. 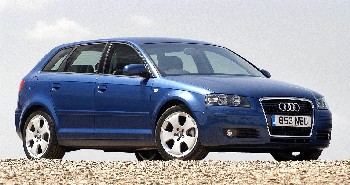