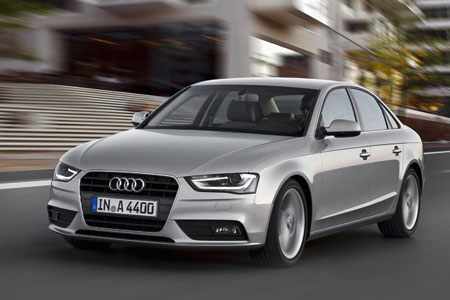 Audi likes to avoid using the term facelift, preferring instead to focus on the changes that have been made to what is essentially a model that’s been tweaked ready for the March plate change.

The revised A4 will go up against the next generation BMW 3 Series in the most important quarter of the year for dealerships so the subtle style changes will have to be enough for now to keep customers from jumping into a competitor.

Prices have gone up by £200 across the range, but Audi says customers will get styling and efficiency gains for the extra cash.

Audi advocates are unlikely to be put off by the subtle style changes which include a re-profiled bonnet and bumper which brings it in line with newer models in the range.

There’s also been an update with the radiator grille and headlights.

Efficiency has been the main benefactor from the facelift with economy improved by 11% on average across the range.

The bulk of the changes have been saved for the diesel engines – including four 2.0-litre four cylinder models and two six cylinders.

Start stop engine technology is now standard so that helps to bring down emissions to 112g/km on the lower powered 134bhp 2.0-litre diesel saloon and fuel economy is now at 65.7mpg.

Interior styling now features some chrome detailing and the A4’s presentation is still smart, clean and simple. Bizarrely, Audi has added a wood trim effect option scarily similar to the 3 Series and it works slightly better in the A4, managing to avoid looking quite as garish.

The similarities to the 3 Series don’t end there, with Audi adding Efficiency mode to its Drive Select system.

Like BMW’s Eco Pro, Efficiency mode allows the car’s systems to be operated at their most fuel sparing level.

An Individual mode on Drive Select allows customers to fine tune steering and throttle response when specified with the optional satellite navigation system.

The inclusion of this feature means Audi can match BMW on a feature that will tempt customers looking to cut fuel costs.

The A4 will effortlessly eat up motorway miles and a revised suspension means it’s also a comfortable place to be when clocking up business trips.

However, driver engagement is where the A4 is lacking in comparison to the 3 Series.

The electric power steering feels light and the A4 is not as balanced, precise and engaging to drive.

But what the A4 lacks in agility it makes up for in style and comfort. It’s still a solid choice for executive saloon customers looking for more of the same from Audi.