Citroën’s new flagship marque will not, repeat, not, under any circumstances, be subject to discounts or cashback. Ever.

Of course, this isn’t the first time the manufacturer has made similar claims when launching a new model, but in the case of the C6, it’s a promise likely to be kept.

Assembled at the company’s Rennes site in north west France, worldwide sales expectations for the first year of production are a modest 20,000 units. In the UK this will equate to sales “in the hundreds, not the thousands”, according to Citroën. This, combined with an unswerving commitment to sell at list price, is hoped to be enough to keep residual values strong. 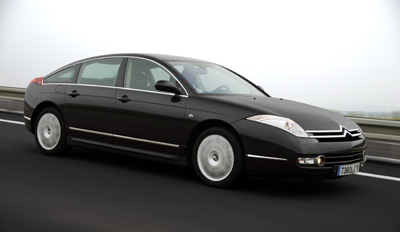 Although much has been done by Citroën engineers to try and ensure a dynamic driving experience, the main objectives with the C6 were to create a car of exceptional comfort and safety.

This has been achieved through several ways. The latest generation Hydractive 3+ suspension, with electronically-controlled springing and damping, is designed to give a ‘magic carpet’ ride.

Nitrogen-filled spheres work in conjunction with clever electronics to optimize passenger comfort. The system offers two suspension settings and 16 variable damping settings that are managed independently for all four wheels.

Citroën has coined two terms to describe the suspension modes: SkyHook and RoadHook. SkyHook, the main operating mode, is geared towards comfort and body control. It refers to the fixed point (the sky) used by the system to relate the damping information it receives from the car’s sensors.

RoadHook kicks in when the car detects more committed driving and places the emphasis on road holding. To ensure a seamless switch between the two modes, the settings change in 2½ milliseconds. Despite the complex suspension set-up, Citroën say it is maintenance-free for five years, or 124,000 miles.

The quest for comfort extends to significant soundproofing throughout the car, including laminated side windows to further reduce noise. Made up of two sheets of glass and plastic film, the result is not only excellent acoustic properties, but a five-star safety rating from Thatcham as it’s practically impenetrable. It offers protection from both theft and injury from breakage in the event of an accident.

The car’s safety credentials have been further strengthened with impressive Euro NCAP ratings. In results published just two days after its international press launch, the C6 becomes the first car to be awarded the maximum four stars for pedestrian protection. This is due primarily to its ‘pop-up’ bonnet.

Currently unique within the European market (though Jaguar and Honda are among the manufacturers soon to release similar systems), a combination of impact sensor and pyrotechnics raise the bonnet 65mm in just 40 milliseconds, greatly reducing the risk of a struck pedestrian’s head hitting the windscreen. The C6 also scores highly for occupant protection, with five stars for adults and four stars for children.

These solid credentials of comfort and safety, combined with unique styling and limited production numbers, should prove useful tools for helping the C6 attain halo status for the Citroën brand. This in turn giving dealers a genuinely distinctive offering for premium buyers, which won’t need to rely on RV-damaging discounts for success. 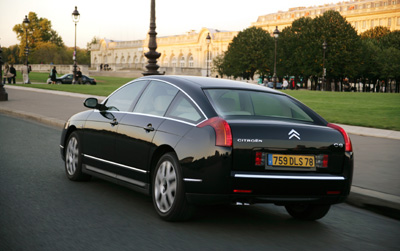 Citroën is pitching the C6 as a fresh alternative to the usual suspects, rather than a direct competitor. Based on a stretched C5/Peugeot 407 platform, its combination of hydropneumatic suspension and extensive sound deadening make the car a relaxing drive.

Citroën is expecting an 80/20 sales split in favour of diesel, and we certainly found the HDi unit the pick of the two. Neither engine provides electrifying performance, but they do usher the car along in an unruffled manner – delivering on Citroën’s aim for a relaxed driving experience.

Relaxed doesn’t mean the C6 is a marshmallow on wheels, however. The clever active suspension and speed-variable rear spoiler deliver confident road handling, despite its generous size.